In "Other Races in Monvesia," I briefly touch on player character races that do not [currently] exist in the campaign setting.  While some of those were ruled out completely, others were reserved for speculative purposes.  The difference between does not exist and will never exist is fuzzy--after all, halflings came to be an important part of the setting, when I had first ruled them out as over-used; similarly, half-orcs have also since found a home here.  Nevertheless, there remain some aspects of traditional fantasy gaming that I have continued to avoid.

Having already learned to avoid saying never in Monvesia, my aversion to certain elements can still be rated:


With these guidelines, I would like to explore more of what you won't [currently] find in Monvesia--this time taking a trip into the Monster Manual.

Unless otherwise noted here or in later posts, most monsters presented in the Monster Manual exist in Monvesia with little or no alteration; or, at least, could.  Any lack of reference to an "official" monster does not mean that is is not a part of the campaign.

A large number of beasts, monstrosities, plants, and other creatures not listed here fall under a lesser form of "Aversion Level:  0."  I have not expressly outlined the flora and fauna of every location in the world.  Many creatures could just as easily exist as not--or only exist in particular regions.  I did not find it necessary to explore every single creature in this post.

In particular, this refers to kua-toa and sahuagin--the "fish" people.  I'm sure Xahaca or even the Maelstrom of the Frenetic Ocean would be a natural place for these beings.  I must decide which is the original race, which the tainted counterpart (after the arrival of goliaths and/or tritons).


Deep scions are likely the tainted counterpart of tritons.

Merfolk and merrow also do not currently have a place in Monvesia--but potentially may.  The merrow could easily be interpreted as the tainted counterpart of the merfolk.  With the goliaths as a seafaring race, it could be assumed that their taint would carry over into the races of Xahaca.

Giant, monstrous spiders are terrifying enough, so do we really need to evolve them into humanoids, too?  Driders (and similar Drow elements), ettercaps, and tlincalli ("scorpion folk") are too specific to other worlds to have a niche in Monvesia.

Then again, there is also the possible southern continent of Ombo to consider.

Beholders and their kin are iconic to the game--but they belong wholely to another setting.  There is a plethora of aberrations to choose from, so I do not regret omitting the beholders from Monvesia.

While fiends do have a presence in Monvesia, demons, devils and yugoloths (as they are presented) do not.  The complex relationships between these types of fiend and their hierarchies--which have been passed down through several editions of the game--are not appropriate for the unique planar "politics" of Monvesia.  Stripping away the politics, there is still a lot of redundancy--particularly between demons and devils (balor and pit fiend, imp and quasit). Only a handful of fiends are needed.

Demon-, devil-, and yugoloth-related fiends, such as the barghest and tanarukk may prove to have a place in Monvesia as I further explore the daemons of Inferno.  The individual lore of each may not be reconcilable with the nature of Taint, however.

Demon Lords and Archdevils will never have a place in Monvesia.  Their ranks are served by the Undying of Abyss and the Vices of Inferno


As I develop the hierarchies of the spheres, I will pick and choose fiends from these sources to add to the ranks of angels.

Giants are a very common story element, and there are more in the game that I need.  For me, some feel more like fairy tail nuisances rather than Nordic antagonists. This includes:  cyclopes, ettins, and  fomorians.

The giants of Monvesia include:  firbolgs, goliaths, ogres, ogrillons, oni, and trolls. The [true] giants are extinct; so while they will not be encountered by player characters, they do have a lasting effect on the campaign setting.

The nature of dragons in Monvesia does not encourage the existence of half-dragons.

Illithids and thier kin (including neothelids) are personally among my favorite creatures--but to include them as-is means to adopt massive cultural systems into a world that is already pretty full.

While insectoids are not necessary outlawed from Monvesia, the ones presented in the Monster Manual--ankkhed, hook horror, kruthiks, thri-kreen, and umber hulk--are all very particular creatures that belong in different worlds.  As with arachnoids, giant and monstrous insectoids abound in Monvesia--some of which may be highly intelligent.  Humanoid insects just don't fit.

Not all creatures native to the Shadowfell in the modern editions of the game yet have a place in Monvesia.  These include:  skulks.

I want slaadi to fit in Monvesia.  The toadstone myth is close to my heart, and I love how it is incorporated into this race.  I've tried tying them to a particular transitive plane, but I can't make the lore fit right.  Perhaps the lore of the slaadi is too specific to be re-skinned for Monvesia. I will continue to explore options--but for now they do not fit.

Then again, Eternity is a vast ans varied plane.

The grimlock, the meazel, and the quaggoth are all several more options for tainted humans. However, too many strains of a disorder will just complicate the world.


In recent months, even the "dual strain" theory that led to both orcs and bugbears has been cancelled.  Bugbears are not tainted humans, but neanderthals--a relative of the dwarves and gnomes (mimicking the goblin-hobgoblin-bugbear relation).

In their current state as tainted counterparts to firbolgs, the lore of the troll is currently bound to overall themes of Monvesia.  While the lore of the troll variants could be reconciled with that of the taint, they create something very specific--a result that I'm not sure belongs in my setting.  But then, I have not yet fully explored the place of firbolgs in the world.

The Underdark is not a region of Monvesia.  While some races native to that region  in other worlds have made their way into this setting, not all can.  Underdark races and creatures that do not exist here are:  derro, drider, and any drow (including the drider, the draegloth, etc.) or duergar beyond their basic entries in the Monster Manual.

One former entry on this list is the gorgon. What most sources call a gorgon, D&D has instead named the medusa--after one of the gorgons of classical mythology.  This allows them to use the name "gorgon" for a stone and/or iron bull that is, in all other ways, a bovine basilisk.  This naming has always bothered me, so I did not want to endorse it.  Instead, I have renamed it the colchitaur, after the khalkotauroi it vaguely resembles.  Colchitaurs are bronze, not iron; they breathe a red-orange smoke that turn their vitims into bronze. 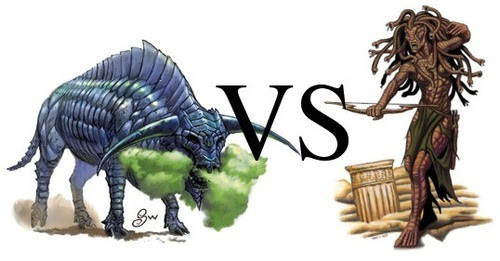 The "opidian" creatures ("medusas," nagas, yuan-ti) and tortles have been grouped together with the lizardfolk, dragonborn, and kobolds as components of an ancient Scalikind Empire.  The "medusa," therefore, may return to its classical name:  gorgon.