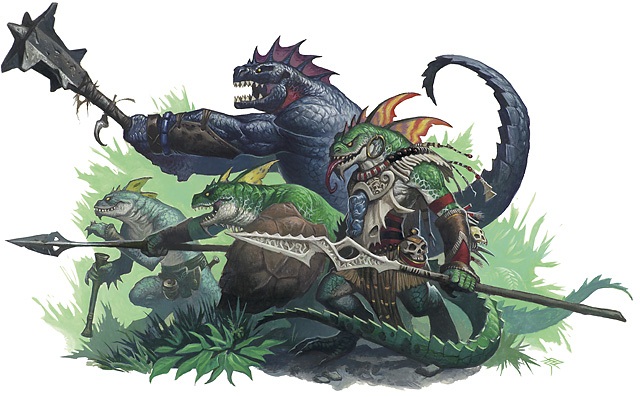 -----
Language Analog: Lizardfolk speak dialects of the monster language Draconic, which has no real-world analog.
Inspiration: Traditional lizardfolk from the various editions of D&D.

Lizardfolk, in BD&D, are just a monster.  I had not considered their overall place in the world when I made them the inhabitants of the Temple of Akhnaphar.  Their presentation in that adventure is "explained" here.

They are presented as a playable race in 5th edition in Volo's Guide to Monsters. As lizardfolk are rare, lizardfolk player characters are very rare.

The official history states that lizardfolk communities "spontaneously" showed up in Monvesia some time after the arrival of the goliaths.  One such community, discovered on the border of the Honderreich and Dvergheim, was found to follow the ancient human Cult of Perseverance--originally practiced by humans during their exodus, and discarded not long after arriving in Monvesia.


This northern community also venerated the Akhnaphar, a term they learned from local goblinoids.  The Akhnaphar was treated as a prophecy among these lizardfolk.

This suggests a more specific history for this people: that lizardfolk came to Monvesia with the humans. The recent arrival of vanara explorers from Henjal supports this.

Lizardfolk are native to Celippanu in Henjal, where they were encountered during the human exodus (celippanu is a vanara word meaning "scaly[folk] country").  In their native land, they are the caretakers of an ancient empire that once spread throughout most of Henjal.  Though not the founders of the Empire, they were charged with its protection and defense.  Ruins of the Empire of the Evening and Morning Star remain throughout Henjal--great monuments covered in creeping vines and jungle underbrush, or else half-burred in sand and half eroded.  Though the vanara have taken control of part of territory, the land south of their kingdoms remains the lizardfolk Celippanu.

Before human contact, the lizardfolk religious tradition centered around the veneration of local dragons as guardian spirits.  The vestiges of that religion remain in that lizardfolk are the only race to demonstrate draconic ancestry sorcery.  This affinity toward dragons can even be seen in that a community of lizardfolk was entrusted with one third of a map that would lead to the Zwiehaender of Oerloeg.

Lizardfolk traits can be found in Volo's Guide to Monsters.

Lizardfolk keep giant lizards as pets, often using them as draft animals and mounts.  While the Monster Manual only has a single entry for this creature, this represents several varieties.  There are also additional varieties favored by the lizardfolk.

The multiple variants of giant lizard are based on the entry in the Rules Cyclopedia, expanding options as per the Monster Manual.  The Giant Aquatic Gecko is pure speculation, as I cannot otherwise find a real-world equivalent of a lizard with both "hold breath" (semi-aquatic lizards) and "spider climb" (geckos).