In my Nefret campaign, the souls of gods and mortals are inexorably tied to the structure of the planes they inhabit--for every being is composed of an aspect of each plane.  With a strong culture of life, death, and afterlife, it is important to establish the details of the soul and planar cosmology early on in the campaign.  The player experience interacting with these elements needs to be consistent.

Since I know my players follow the blog, I'll also point out that the information here isn't really privileged.  This is the basic knowledge that any character with 1 rank in an appropriate skill would know. 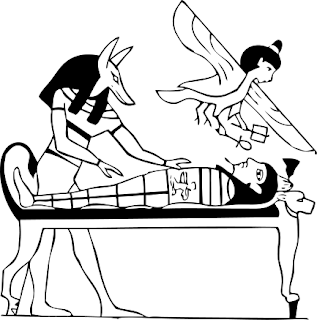 Nature of the Souls

All beings, mortal and immortal, are composed of several souls:  a body (khat), a spirit (ka), a mind (ba), a shadow (sheut), a heart (ib), and a name (ren).  In death, these components separate--and may be transformed and/or reunited in the afterlife.

A living body and a dead corpse both share the designation of khat. After death, the the corpse may be preserved as a mummy--which can be the result of natural forces or of artificial embalming.  The khat is a mortal, decaying body born of the mortal world of Gebeb.

Pleased with your work with the Tomb of Akhentepi, Lady Sebti has asked you to explore another site in the Dead City: the house of a nobleman named Pentheru.  This estate is both the smallest and newest structure in Wati's noble quarter, and for that reason has caught the Peraten noblewoman's attention. After your last meeting with Sebti, she sent a messenger along to the Tooth and Hookah with more information.

That information is sparse, however.  What is known about this site has been gleaned from physical evidence (stone quality; outward construction; and its relative position among other estates) as well as tablets recovered elsewhere in the city by another team of explorers. The name Pentheru appears to refer to two men:  the minor noble who commissioned construction on the manor, and the nobleman's son who inherited it before construction was complete.  Evidence suggests that this family was  newly elevated to the social elite.

The House of Pentheru is nestled among larger estates in a region of Wati referred to in engravings as Vizier's Hill.  As the highest elevation of the city, it was specifically Vizier's Hill that was unearthed by the sandstorm four years ago.  The diggers who uncovered the remainder of the city did not spend much (if any) time on the Hill--so the estates here are untouched by your contemporaries.

Not all character sheets are created equal--for each must be built upon the needs of the campaign.  For the Nefret Campaign, I needed a sheet that incorporated Adventuring & Background skills, Hero Points, and Personal Quest.  It also eliminates XP tracking.  The result is below. 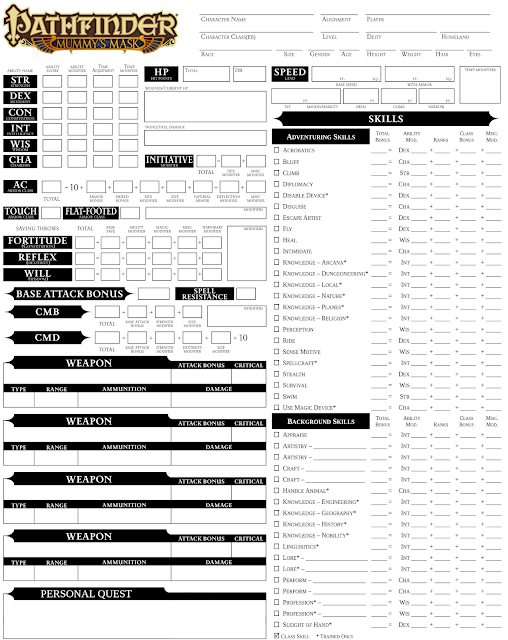 Instead of fixing the underlying issues of character multi-classing, Paizo has instead chosen to introduce hybrid classes (Magus, Arcanist, Bloodrager, etc.)--ignoring the issue and adding needless complication to an already complex rules system.  In my Nefret campaign, I am not permitting the use of hybrid classes; instead, I am encouraging characters to pursue multi-classing in order to achieve prestige classes (such as Arcane Trickster, Eldritch Knight, or Mystic Theurge). 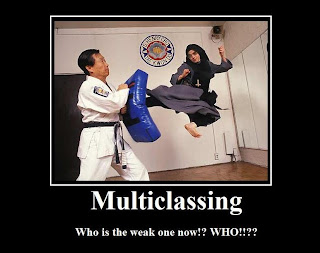 The biggest drawback of 3.x muticlassing (which is similar to dual classing of previous editions) is that the system is based on the premise that characters receive an equal power jump at each level.  However, while each hit die and related increases are relatively uniform, class abilities at each successive level are considerably more powerful. For instance, gaining access to a new 4th level spell is certainly more of a benefit than gaining access to a new 2nd level spell.  Therefore, the idea of "class level" needs to be considered in two parts:  class hit die and class ability level.
Read more »
Posted by ENC at 11:50 PM 4 comments:

Four years ago, a sandstorm uncovered part of a walled-in city less than a day's journey from the new capital at Peraten.  When diggers were sent out to excavate the city, they found that there was no gate into it.  An arbitrary location was chosen to carve out a passage so that the excavation could continue.

Among the sands within the city, diggers also discovered and discarded hundreds of bodies.  They also found that while the outer walls were smooth, the interior walls were covered in hieroglyphs.  These glyphs name the city Wati, and they tell of a plague of madness that destroyed the city; and of the decree of the Pharaoh Sekhtet to have the city sealed in order to prevent any remnants of the plague from spreading.

Less than a year ago, excavation on Wati ceased among rumors of curses and walking dead.  These rumors were encouraged by the erection of an obelisk just inside the makeshift gate, inscribed with powerful protection charms and dedicated to the Aten.  Soldiers now stand guard outside Wati's gate, only allowing the agents of particular noble houses to enter.

I've always found the epic-level (over 20th level) rules for 3.5 to be a bit convoluted and excessively complicated.  With the higher power levels of Pathfinder characters, we can take a simpler approach.  By allowing levels beyond 20th, all characters can reach the capstone abilities of their [primary] base/core classes--so they are no longer penalized for multiclassing.  I realize that my Pathfinder campaign barely started, and I'm thinking a bit far ahead--but this has been something at the back of my ind for a while.

Character Level Cap:  Character levels cap out at 35th.  No level can be earned beyond 35th.  In general, this will allow most characters to follow 1 base/core class and 1 prestige class to completion, with a few extra levels for "dipping" (when necessary to meet feat and prestige class requirements).


If my Nefret Campaign ventures to these levels, then I will allow characters to progress through level 30 using the rules presented here.


Class Level Cap:  All classes cap at the highest level in their original source material.  Core and base classes cap at 20th level, while prestige classes cap at 5th or 10th level.  In order to progress to epic level, a character must multi-class (using the normal rules).