In some settings, the undead are the creation of bored, evil gods who seek to terrorize the mortal world.  In Monvesia, they are a natural offshoot of the transitive region of the Necrosphere.  This region goes by several names:  the Plane of Shadow, the Plane of Fear, the Domains of Dread, the Nightmare Realm.  All undead are powered by this place, and it is in this place that the most powerful of their kind have come to live eternally and rule over their fellows.  These are the Undying who make pacts with warlocks. 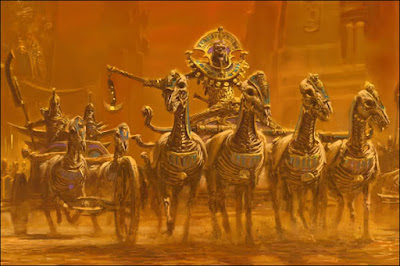 Chief of those undead who return by their own will.

Amli is an incorporeal mass of shadow and mist having a vaguely humanoid form.  This great spirit's alien nature is betrayed by having four arms, a head crowned with horn-like protrusions, and dozens of tendrils erupting from its spine.

Amli favors warloks who are envious, vengeful, or otherwise unfulfilled.

Chief of those undead who return by the work of necromancers or other undead.

An ancient corpse embalmed in the oldest tradition, scraps of rotting cloth hang from Ashra's body.  A tarnished funerary mask, having long lost any distinguishing features, covers the mummy's face. Ashra's power is hidden by a simple, drab appearance.

Ashra favors warlocks who are submissive and obedient.

Chief of those undead who return by prearranged design.

A great, skeletal figure with taught rotting skin, Coash has the torso and arms of a man, but the legs tail and head of a dragon.  This eldest of lich-kind dresses in ornate robes, and is encumbered with rich jewelry.

Coash favors warlocks who are prideful, arrogant, or dominant.


Coash is Monvesia's analog to Vecna.

Chief of those undead who prey on the living to survive.

Liltu is gaunt and pale with feral claws and teeth, pitch black eyes, and waxy skin. Hairless in humanoid form, this elder vampire is a master shape-shifter capable of taking many other forms:  bat, crow, demon, mist, rat, wolf.

Liltu favors warlocks that are seen as eccentric or outcasts.

Chief of those undead who return as such possessed by the essence of the Necrosphere.


Orkon resembles a giant, hairless, pig-satyr with ink black skin and eyes, and a boar's snout.  This un-living embodiment of the transitive Necrosphere has golden horns, claws and hooves--and prefers to be adorned in golden jewelry to match.

Orkon prefers warlocks who are treacherous, duplicitous, or who live double-lives.