The June installment of Unearthed Arcana granted "official permission" to abandon the traditional alignments of D&D. Of course, I'd been playing with alternate alignments for Monvesia since I started the campaign--partly because the alignments of 4th edition (the game my group started with) didn't line up with the alignments I was used to.

Originally, I had identified 6 Monvesian alignments, each associated with a color of [Basic D&D] dragon (see "Dragons of Monvesia"). I started to use these colors to describe NPCs in the world.

As the dominant religion of the world (Universal and Metropolitan Orders, see "Priests of Monvesia") and the planar structure (see "Planes of Monvesia") became solidified, these alignments became associated with philosophies.  As more aspects of setting became associated with each philosophy, they evolved into temperaments (complete with humours).

Each temperament has direct correspondences and indirect associations.  Correspondences are direct correlations  (if it is Altruist, then it is the equivalent of good).  Associations apply to stereotypes and expectations, and are not requirements (not every Evoker is a Vitalist).

The philosophy of the element of aether, related to charity and compassion--fundamental concepts of chivalry. It is the standpoint that interaction with others is reality.   Altruists are seen as people who put the needs of others before themselves.  Elemental aether is the opposite of void.  It relates to light and creation.

The vast majority of altruists find evil acts distasteful, and even in opposition to their core beliefs.  Altruists are the temperamentals least likely to perform evil acts.

The philosophy of the element of earth, related to order and justice–fundamental concepts of chivalry. It is the standpoint that experience of the physical world is reality.  Materialists are seen as people who value the gathering of personal possessions.  Elemental earth includes both crystals and metals. Materialism is, therefore, just as much the philosophy of prosperity and commerce as it is other formal structures.

The philosophy of the element of fire, related to freedom and expression. It is the standpoint that all things are driven by an internalized energy that cannot be measured physically.  Vitalists are seen as people who value personal ability and expression.

The philosophy of the element of water, related to balance and acceptance. It is the standpoint that reality is based on action and reaction, cause and effect.   Dynamists are seen as people who "go with the flow."  Water is the element of plants and animals, making dynamism the philosophy of ever-evolving life—and of balance between law and chaos.

The philosophy or the element of air, related to study and understanding. It is the standpoint that reality cannot be unless it is perceived—“physical reality” is a perception of an ideal world. Idealists are seen as people who "have their heads in the clouds."  It encourages an impartial separation from worldly concerns.

The philosophy of the element of void, related to decay and skepticicm. It is the standpoint that all things decay, and that only through destruction can reality be proven.  Nihilists are seen as depressed people with a negative outlook on life.  Elemental void equates to darkness and decay.

Many nihilists regularly perform evil acts. While this is not true for all, nihilists are more likely than other temperamentals to do so.

The philosophy of all elements, either out of tolerance or apathy.  It is the standpoint that no particular philosophy has precedent over any other:  All philosophies are equally valid, or invalid.

Universalism is not a temperament as the others--it has no connection to the Spheres or any humour.  Most characters may be universalists; characters who wish to join Orders, however (Senarian clerics & paladins, for example), must select an appropriate philosophical temperament.

I had used the following image to explain these custom alignments to my players, in comparison to traditional alignments: 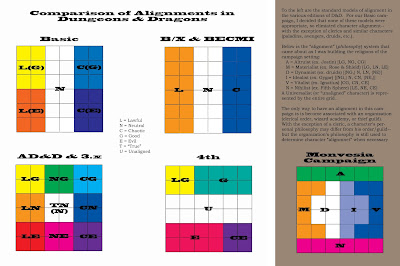 Under a new system wherein alignment is disregarded, these equivalents allow alignment-based spell and abilities to function properly.  Even if a character does not explicily match a particular named alignment, the following equivalents shall be used:

Under the Pathfinder rules, I had used both alignment and temperament.  For 5th edition, however, I think I will discard alignment all together.  Not because I was given permission, but because this setting has been leaning in that direction anyway.  Alignments are something that merely describe your character; temperaments are something characters can interact with.

Temperaments are an integral part of the setting of Monvesia, not just a mehanicah system attacked to the rules.  They are theological, metaphysical, and even medical in nature.  At any time, it may be important to test a characters knowledge or understanding of temperaments.  Temperaments may be involved in any of the following ability score checks: