The game is called Dungeons and Dragons, after all, so I suppose I should touch on the nature of dragon-kind in the world.  The dragons of Monvesia follow a variation of the model presented in B/X, BECMI, and RC:  There are only 6 dragons, and they are not differentiated between metallic and chromatic--they are simply dragons.  There is only one species of [true] dragon, composed of six variations.


A dragon may be of the same color as its father or its mother.  There is a chance, however, that a shared recessive gene carried by both parents might produce a dragon of any other color.

The philosophical temperaments of human religion are associated with colors according to the traditional nomenclature of draconic coloration.  Rakasta, who do not see color in the same way that other races do, use an alternate naming scheme based on other precious materials.


Any dragon may be of any temperament, regardless of apparent color.

Innate Spellcasters: All Monvesian dragons have a chance of being innate spellcasters (as described on p. 86 of the Monster Manual).

True dragons can be found in Prace and Henjal.  They were unknown to humans and goliaths in Raviq.

The son of Oerloeg (see below), who had guarded the Sword of Oerloeg for centuries, was a black dragon. 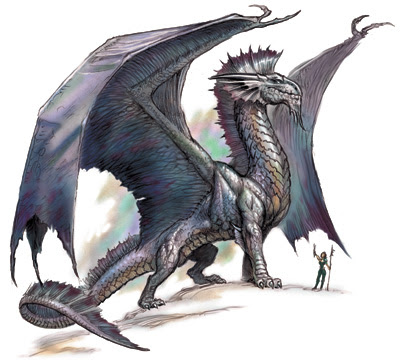 Oerloeg was a blue dragon who was important to the history and folklore of the Honderreich.  Killed during the Orc Wars, her spirit was later used to forge an intelligent sword.  This sword was used by two heroes, each in pursuit of the same foe--the Warlock (later Lich) Hippolyta.  Slain twice, it is unknown if Hippolyta remains dead ... the Sword of Oerloeg may be needed once more. 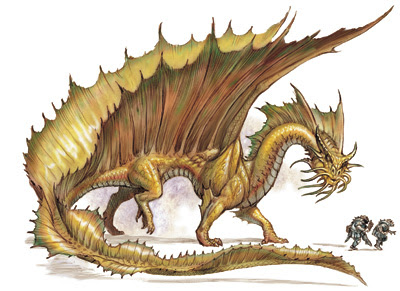 It is rumored that a red dragon may ave taken up residence in the labyrinthine sewers of Kynnysboro.  Arriving when it and the city were young, the dragon would be too large now to leave without destroying a large portion of the city.

Though exceptionally rare, undead dragons are not unheard of in Monvesia; or, at least, they are understood by arcanists and adventurers to be a possibility.  They are dragons who have become bound to the Abyss.

The information above only concerns "true" dragons--the intelligent, innate sorcerers of legend.

The dragon-kin are to dragons as humanoids and homonids are to humans.  Some are intelligent ("draconoids"), while others are animalistic ("draconids").  Monvesian dragon-kin from the Monster Manual are:  dragon turtle, faerie dragon, hydra*, kraken*, pseudodragon, tarrasque*, and wyvern.


* These monsters are not classified as dragons in the Monster Manual, but are treated as such in Monvesia.

In addition to these, Monvesia also has drakes--which are bestial, wingless dragons.  The basic statistics for these creatures can be found in Volo's Guide to Monsters as the "guard drake."  However, the drakes of Monvesia are not the result of a bizarre ritual; instead, they are a species that breeds following the same rules as true dragons--even demonstrating the same color variation.


Use the chromatic guard drake variation, with the following addition:

Gold [Guard] Drake.  A gold guard drake has a burrow speed of 20 feet, a climbing speed of 30 feet, and resistance to fire damage.

Drakes share the same breeding grounds as true dragons, and tend to be of the same color as the dragons hatched there.  Scholars suspect that drakes are more closely related to true dragons than other dragon-kin.  The nature of the close relationship between the two species is as of yet unexplained, however.


The drakes of Monvesia are simply known as drakes not "guard" drakes.