While born from my development of Monvesia, this post really isn't really setting or even rule-set specific.

Should measurements and distances in a game be measured in terms that can be digested by players of a game, or by characters in a story?  While it would be nice to accomplish both, I personally favor the latter.  When determining your mapping scale, you should consider how characters in the setting describe the same measurements and distances.  "5 feet" is an arbitrar unit of measurement, and characters are not likely to have a tapemeasure handy when mapping a dungeon; a pace, howeve,r is roughly the same size--and is a likely measurement for on-the-go adventurers.

Here are the terms I prefer to use in-game, with a few extra for flavor thrown in.

A finger is the average width of one finger.


This is the common diameter of the average coin in Monvesia--of any denomination; approx. 18 – 21mm [dime/nickel/penny].

A palm is the average distance across the palm, equal to four fingers.  Palms commonly used as a multiple of fingers

A hand is the average distance across the palm and thumb (a little more than five fingers [5 1/3]).  Hands are used independently of fingers and palms; they are typically used to measure heights of living creatures:

A foot is the average length of the adult [human] male foot, from heel to toe. This length is considered to be 16 digits, four palms, or three hands.

A cubit is the length of the forearm, from elbow to fingertips; it is about five hands (or just under 7 palms).  Cubits are commonly used to measure architectural features or large heights.

A span is the distance between the tip of outstretched tip of little finger and thumb.  It is commonly used in reference to a half-cubit.

A pace is the average distance one heel travels while walking (the distance between “lefts” when sounding off “left-right-left”). It is approximately 5 feet or 3 cubits, which is the standard scale for small dungeons, taverns, houses and the like.


The "five-foot step" is a pace--which is a good measurement of combat scale.

A pole or rod is one-tenth the common range of a long bow—making it 10 feet, or 6 cubits, or 2 paces. This is used as the standard scale for large dungeons and caverns; adventurers often carry 10-foot poles to measure dungeons (though a double-pace would also suffice).

A league is the average distance that a lightly encumbered man on foot or a draft horse can travel in one hour on a trail. It is approximately 3 miles, which is the standard scale for overland travel. Assuming one only travels eight hours in a day, this is a daily trek of 24 miles; other factors, however, can speed this value up or slow it down.


In my Monvesia maps, I have favored a 3-mile/league hex for local scale, to easily mark the passing of an hour's travel; a 12-mile/4-league hex for regional sale; and a 48-mile/16-league hex for continental scale.


For example here is a local-scale map of the Kleimland that I made some time ago with Hexographer.  It is a snapshot of the region where my first players spent most of their time--just about the time the character left on a quest outside of the region, during the height of the war with Hindland. 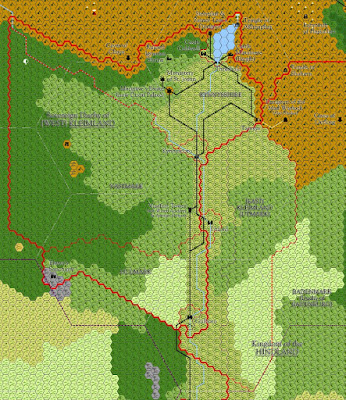 You will notice the outline of very large hexes; these are the continental sale hexes used on my original, hand-drawn map.  I am working to convert my continental Monvesia map to something I can manipulate and share digitally.  Stay tuned for that.  In the meantime, there are other sundries of the overall setting to share.