For every change you make to the expected setting early on in developing a campaign world, you have seven more to make later. Since magic items are tied to the very structure of the elements and creature types of the world, the items below have alternate imagery and/or game mechanics in Monvesia.

Weapon (any sword), legendary (requires attunement by a paladin or eldritch knight of the appropriate temperament)
There are six varieties of "holy avenger"--one for each temperamental philosophy.  Each deals a different type of extra damage to a particular set of creatures:

These swords do not deal extra damage to elementals--only the transitive beings and outsiders listed. 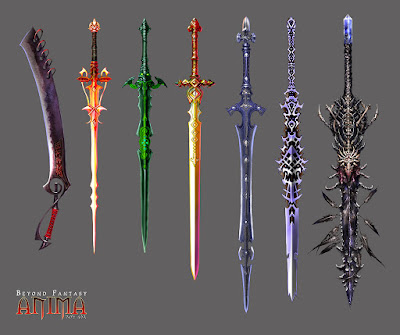 The Deck of Illusions is a variation on the Sancte decks of Cuorria, having 54 cards (the 9 pip cards of each suit).  As mentioned in the Dungeon Master's Guide, when this item is found as treasure, it is typically missing 1d20-1 cards (at random).  With the Deck of Many Things, this forms a complete Sancte deck.  Since certain creatures don't exist in the Monvesia, the illusions are modified to match the lore of temperamental association (and match the images that appear on the cards of a Sancte deck).

* If the owner of the deck is a member of this race or class type, then the illusion will be of the character themself (of their own race and class).
Italicized entries are new creatures first mentioned in "Planar Inhabitants of Monvesia."

Deck of Many Things

The Deck of Many Things is a variation on the Sancte decks of Cuorria, with each trump card corresponding to an effect.  With the Deck of Illusions, this forms a complete Sancte deck.  The Sanct trump cards correspond with the traditional deck of many things as noted below.  Because there are more saints, there are two additional cards, detailed afterward.
Balance. Your mind suffers a wrenching alteration, causing your temperament to change.  Altruist becomes Nihilist, Dynamist becomes Vitalist, Idealist becomes Materialist, or vice-versa.  If by some miraculous means you are Universalist, this card has no effect on you.
Prophet. You are immediately cursed with a connection to the mind of a genie or angel.  This being's thoughts and opinions will constantly flood into your mind, granting you disadvantage of all Intelligence and Wisdom checks while cursed in this way.  Only a saint of the magic of the Reaper (The Fates) card can end this curse.
Traveler. You and all of your possessions are teleported to a random location no less than three miles away.  Your new location will be hostile to you--but surviving any immediate danger will result in the discovery of a rare, wonderous item.

Relatively unchanged, this armor grants the ability to speak the Ignan tongue instead of Abyssal.

There are two, additional elemental gems in Monvesia:

This class of magic item is not available in Monvesia.  Because there is a reduced variety of giants in this setting (only goliaths, ogres, trolls, and maybe oni), there was never any pressing need for a magic item of this type to be developed.  Dragons (including krakens and the tarrasque) remain the most formidable foe in this world.

Use the following table to randomly determine if there is a creature in the flask, and what kind:

* There are new varieties of these creatures that inhabit the Spheres.

While a light shines in this lantern, you can use an action to speak the lantern's command word and summon a light elemental, as if you has cast the summon elemental spell.  The lantern cannot be used this way again until the next dawn. 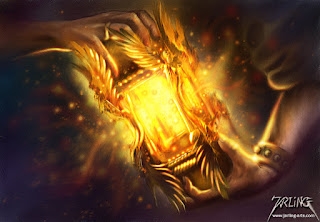 Just as the Holy Avenger became several Crusader's Blades, so does the Mace of Disruption become a series of weapons.

There are two additional rings of this type in Monvesia:
Ring of Light Elemental Command. You can expend 2 of the ring's charges to cast dominate monster on a light elemental.  In addition, you also radiate bright light in a 20-foot radius and drim light for an additional 20 feet. You can also speak and understand Luman.
If you help to slay a light elemental while attuned to the ring, you gain access to the following additional properties:

Ring of Void Elemental Command.  You can expend 2 of the ring's charges to cast dominate monster on a void elemental.  In addition, when you are in dim light or darkness, as a bonus action you may teleport up to 20 feet to an unoccupied space you can see that is also in dim light or darkness. You can also speak and understand Vacuan.
If you help to slay a light elemental while attuned to the ring, you gain access to the following additional properties:

In Monvesia, there are different creature types to be protected from.  Treat a roll of "Celestials" as "Outsiders;" a roll of "Fiends" as "Ethereals;" and a roll of "Undead" as "Umbrals."

Weapon (longsword), legendary (requires attunement by a creature with the same temperament as the sword)
In Monvesia, there would only be six swords of answering:

While this urn is completely empty, you can use an action to speak the urn's command word and summon a void elemental, as if you has cast the summon elemental spell.  The urn cannot be used this way again until the next dawn.  The urn weighs 5 pounds.

Only one sentient magic item has yet appeared in Monvesia:

Forged from an alloy of adamant (rare in the mortal plane, but abundant in the Lithosphere) and orichalcum ("Dwarven gold"), the zweihaender has a dark grey blade which shimmers pink under direct light.
You gain a +1 bonus to attack and damage rolls made with this magic weapon.  You gain an additional +1 when attacking a spellcaster (for a total of +2).  It has the following additional properties:
Magic Hunter.  While you hold this weapon, you are aware of the presence of Tiny or larger creatures within 60ft of you which are capable of casting 1st level spells or higher.
Sentience.  The Zweihaender is a sentient, idealist  weapon with an Intelligence of 16, a Wisdom of 13, and a Charisma of 21.  It has hearing and darkvision out to 120 feet. The weapon can speak, read, and understand Draconic, Dwarven, and Honderreicher, and can communicate with its wielder telepathically.
Personality.  The blue dragon Oerloeg has extended her life indefinitely by having her soul bound to the Zeihaender.  Her distaste for spellcasters began long before the Orc Wars, having followed dwarven culture and tradition for decades.  Her hatred was solidified when an orc warlock disabled her in combat, allowing a squad of trolls to bring her near death.  With her dying breaths, she made arrangements with dwarven artificers (the only spellcasters she trusted) to fuse her soul to a greatsword--that she may get her revenge after the death of her body.
She had her chance at closure when the hero Jostin came into possession of the Zweihaender, and sought to defeat the half-orc warlock Hippolyta.  However, when she heard the name again a century later, she flew into an inconsolable rage--posessing the body of November, and bringing a new party of heroes against Hippolyta.

There has not yet been a need to detail artifacts for Monvesia.  Given the nature of ascension, there must be at least six artifacts present in the world--one tied to each saintly path.  Until they are specifically needed in play, however, I will not explore any detail of their possible identities or features.