The tribe of Maftets that Tetisurah suggested the party visit was due near Hut-Ra-Neskef (formerly Oasis) a month ago--but their visit appears to have been delayed.  The town leaders are concerned for the safety of their allies in the wilderness.  Before visiting Oasis, the maftets would stop at a walled shrine two weeks travel away--perhaps someone should go there to see if they can learn of the tribe's fate. 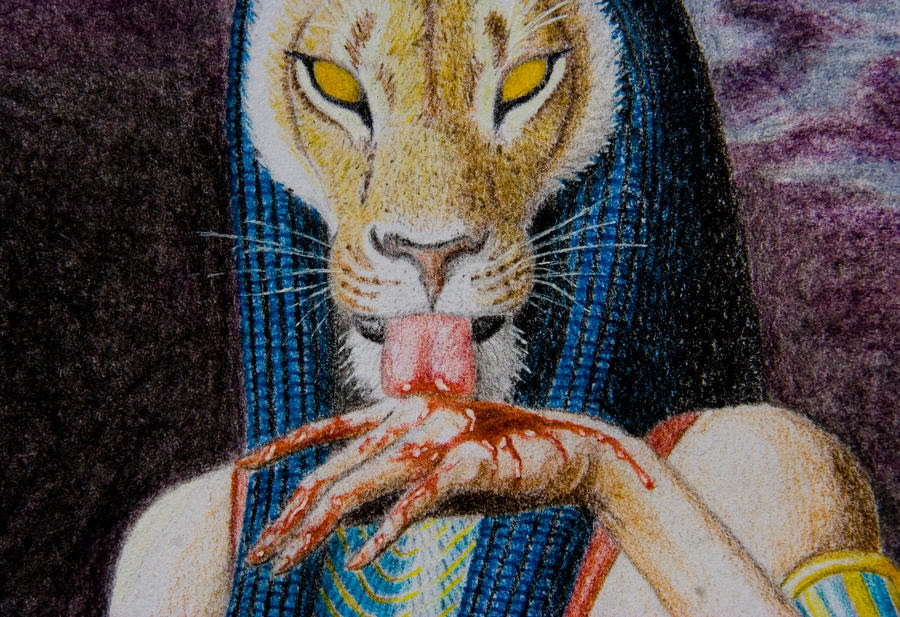 The parched dunes are a region of the great desert beyond Tem-Akh--a mix of flowing sand, badlands, craggy rock, and hills.  It is the Parched Dunes that seperate the Nefret River valley from the catfolk homeland of Tamisha.  Here, there are many natural dangers, some ruins, and even fewer settlements.

Hut-Ra-Neskef, formerly Oasis (or Wahe), is a small town in the midst of the parched dunes built between a watering hole and an adamantite mine.  The recent visit of the party has provided new wealth to the settlement--as well as a surge in population as followers and other pilgrims flocked to venerate the party.

The Walled Shrine is sacred ground to the maftets--and a safe haven for several other tribes of nomads who wander the Parched Dunes.  The maftets are known to visit this site before going to Hut-Ra-Neskef.  Another local tribe reports an infestation of genies there.

Ekram Iffek is a member of the Order of the Medjay that the party had exiled from Peraten with the authority of one-time guard captain Ibankhkhnum.  Since his exile, and the loss of his mask (a symbol of his rights and privilege), he has been dishonorably ejected from the Order.  He has been hunting down the party sine they left Tem-Akh with the hope of enlisting their aid.

Kixexa is an efreeti noble whose followers have taken over the maftets' walled shrine.  She has aspirations of becoming the uncontested mistress of the Parched Dunes, and has taken over the Walled Shrine as the base for her conquest.

A Maftet Tribe that frequents the region normally passes near Hut-Ra-Neskef twice a year--but the tribe was expected weeks ago, but has not arrived yet.  The party must seek out their camp elsewhere in the parched dunes to assure their safety.

Naheeba is the elder of a tribe of human, merchant nomads.  Familiar with the local maftet tribe, she is also concerned because they have not been encountered in half a year.

Picasi is an oread monk who has been travelling with Kixexa for several years--ever since the efreeti noble rescued her.  While she has been loyal to Kixexa, she has also begun to question some of the noble's motivations and methods. After settling their affairs in Hut-Ra-Neskef, the party's new caravan embarks deeper into the Parched Dunes--this time in search of the maftet shrine, which is on the way to Tamisha (where the party hopes to learn more about catfolkhistory, and [hopefully] the Sphinx Empire).  Barely two nights in, the party jumps at the call to rescue a tribe of human nomads from a pair of raging bulettes.  Naheeba, the tribe elder, tells the party that they have not seen the maftet tribe for months--while normally it is common for their two groups to encounter each other regularly, as they share many of the same campsites in turn.

Days more pass as the party's caravan ventures further into the dunes.  The party comes to a well-cared-for rock garden, which they are careful not to disturb.  In its vicinity, they also find a hole in the ground--the entrance to some creature's habitat; Jaeth explores the hole, finding it to be an abandoned drake's nest.  As they party sets camp after witnessing these curiosities, they catch a glimpse of the walls of the shrine on the horizon beckoning them to enter ... tomorrow.

As the party approaches the shrine, Aloysa recognizes the events depicted in a mural on the walls--both from both her research and from the folklore of her homeland. The doors of the shrine are decorated with images of Sekhmet devouring the blood of Ra's enemies, becoming intoxicated by it.  The maftet shrine is a temple to Sekhmet in her role as bloodthirsty hand of her father Ra.  Not long after recognizing this, the party is stopped by a wall of fire--which does little to hinder them.  Kiji, Jaeth (riding Kijinx), and Pleebit (in the form of an eagle) take to flight and make quick work of an efreet on the shrine walls. The others enter the shine's courtyard, and encounter a lazy sand drake, Kjef-Kadef--who is convinced (with effort) to join "Francis" as an employed member of Nyala's travelling show.

After finding the ground floor of one of he shrine's towers to be empty, the party ventured into the basement--which would prove to house the shrine's altar.  The first chamber below the tower was inhabited by a dim-witted earth elemental who had separated himself from the collective mind of the plane of earth (a fact that Jaeth found both appalling and fascinating).  Quick conversation was enough to disarm the simpleton--who had accented the name Djo'ey from the sand drake in the courtyard.

Impersonating Djo'ey, Neskef ventured into the next room and "met" Picasi, the oread monk who had come to claim the underground shrine as her private chamber.  The party soon followed Neskef into Picasi's quarters, which led to a minor bonding between Aloysa and the oread over their shared respect for the "bloodthirsty" matriarch of the catfolk.  Picasi explained that her group had come here on Kixexa's orders, and had been working to keep the place safe from any intruders (including the people who built it).  Aloysa confides in Picasi that they will have to battle Kixexa, a fact the monk concedes--though she refuses to participate.

In the second tower, the party quickly came to blows with another efreet--then with Kixexa herself.  Though rough battles, the party proved victorious in both encounters; while Kiji learned that fireballs hurt, he also learned that he is not completely vulnerable to such flames.  The most beneficial treasures found among Kixexa's possession were a series of maps made by her and her followers of the local Parched Dunes--showing such landmarks as an abandoned temple of Ra, an obelisk, and the rock garden the party had already visited.

While exploring the top the second tower, members of the party notice a humanoid figure wandering the desert, heading toward the caravan.  Using Pleebit's eagle eyes, they quickly discover it to be Ekram Iffek, the Medjay soldier exiled from Peraten.  When the party ventured down to the caravan to meet him, they find him unarmed and wanting to talk.  It would seem that he has been looking for the party for some time in hopes of enlisting their help ... in attacking the Medjay.  Since his exile, he has become a pariah, and he has finally come to understand the corruption in the Order.

Leaders of the Order have entered a sphinx-shaped temple, but the general membership have no idea what they are doing in there.  Ekram believes this is the same temple that houses the final piece explaining the disappearance of the maftets.  Unfortunately, the temple is not on the route to Tamisha--so the party will have to put their current journey aside to investigate.

Before they leave, Picasi is invited to travel with the party.  She accepts the offer, and hints at a desire to fight alongside Jaeth, the chosen one of her elemental plane.  His current cohort, known only as Neskef, volunteers to leave Jaeth's service in order to rehabilitate Djo'ey.  With the blessing of the Elemental Plane of Earth, Picasi becomes Jaeth's new cohort.

While travelling to the Sightless Sphinx, Ekram Iffek tells the party of a band of merchants he has been travelling with.  He guides the party to the merchants' camp, and facilitates negotiations between the two groups.  The party agrees to allow the merchants to travel as part of their caravan on the condition that the merchants assist them in liquidating some of the less important artifacts that they uncover.

In the time that Ekram has in the midst of the party, he and Iban have become close (though not so close so as to cause Jaeth any reason for jealousy).  They bond over their treatment at the hands of the Medjay, and discuss its corruption, and how it could be exploited.
Posted by ENC at 11:12 PM