I continue to explore elements of the 5th Edition D&D rules, adapting the new additions to Monvesia.  Here are two more 5th-Edition-style factions for Monvesia.  While the Crusaders of the Temperamental Orders and the Leagues of Ninety Nine were already integral parts of the campaign setting, the two presented below are new creations  ... sort of.

The Guild of Fellows is an adaptation and expansion of the influence of Vastfurt Academy--an institution whose creation and growth were plot points in Monvesia's founding campaign.  I'm adding this as an option for the campaign because my new round of perspective players have been following similar ideals in other campaigns.

The Lyncasta are a direct adaptation of the Emerald Enclave of the Forgotten Realms.  The name has been changed to reflect Monvesian history, and campaign-specific details are added.  It is also included to match the play style of some potential players

In order to hold a position of authority in any of the renowned academic institutions of Monvesia, a person must be in good standing with the Guild of Fellows.  The guild was formally established when Vastfurt Academy in the Kleimland, sought recognition from the University of Alouse in Montaigne. While these agreements between these two institutions formed the core platform of the Guild, other schools outside of the Divine Drajan Empire (such as the High Academy of Sediu in Tristeren or the College of Mermis Trismegiston in Notopoli) have also come be recognized by this faction.


Academic institutions inside the Empire are typically tied to the Temperamental Orders, and are usually more closely aligned with the Crusader factions.

The Institutions recognized by the Guild of Fellows are operated independently of each other--as well as independently from the Guild.  While one institution may recognize and endorse the work of one of its researchers, other institutions aresnot bound to do so; however, should the Guild grant its blessing to the research, all institutions associated with it typically follow suit (or risk falling out of favour with the Guild).

It is the Guild of Fellows that champions the study of the Taint and its cure--despite opposition from many Temperamental Orders.  It is also interested in the history that has been repressed by the Universal Orders (or has otherwise been lost).


Equivalent:  The closest equivalent to academic institutions in mainstream D&D would be The Harpers (though that faction is also represented in the Leagues of Ninety-Nine).  This equivalence is based on a suggestion in Princes of the Apocalypse that the Eberron equivalent of the Harpers is either the Library of Korranberg or Morgrave University:  "It's a bit of a stretch ... Their purpose is less political, but they're still altruistic and stand largely outside existing power structures."

To gather the collected knowledge of the past, and to explore a new understanding of the world according to testable, verifiable means. 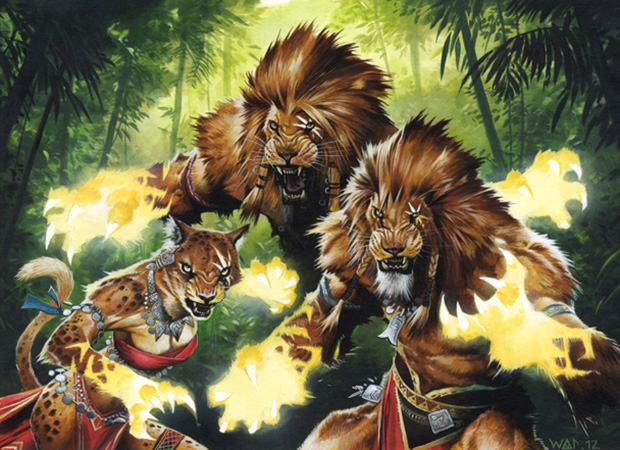 "Heathen" is a term used by Honderreichers to mean "practitioner of an uneducated philosophy."  In Cuorria, the term used for these is "pagan."  The word is generally used in reference to Elven, Rakastan, and Galtish traditions.  Barbarians, druids, monks, rangers as well as some sorcerers, warlocks, and eldritch knights from these traditions collectively represent the struggle to maintain balance between the natural and civilized worlds.
The Lyncasta are an association of fringe-walkers drawn from all of these traditions--or from those sympathetic with these traditions.  They take their name from a great pride of the Rakasta that was eradicated early on during the human migration into Monvesia.  The Lyncasta are dogmatically opposed to the Temperamental Orders as well as the dwarven Keeperate and goliath Medicine Work--for within those traditions is an imperative to tame the wilderness, and spread civilization. Never again will an entire people (or species) be allowed to be destroyed in the name of civilization.

On the other hand, the members of the Lyncasta organization understand that the loss of the great pride was in part due to the pride's stubbornness and arrogance.  So long as the wilderness fights against civilization, then civilization will fight back.  The Lyncasta work, therefore, to maintain the balance between these two forces.

As a whole the Rakasta race is honored that the legacy of their lost pride lives on with these new Lyncasta.

Equivalent:  The Lyncasta are the equivalent of the Emerald Enclave (and much or their detail simply copies that faction)--though they are somewhat more openly militant.

To restore and preserve the natural order, keep the elemental forces of the world in check, keep civilization and the wilderness from destroying one another, and help others survive the perils of the wilderness.