Nefret, Chapter 5: Into the Valley of the Princes

It has been ten days since Aloysa left for Tamisha, and now she returns to Peraten with a spotted tiger at her heals.  Unfortunately, she returns with little additional information regarding the thrice-divided soul--merely that it is a reference to an ancient empire that ruled long before the dynasties of Nefret. The elders of Aloysa's clan do not believe this empire, said to be ruled by sphinxes, to be historical fact--merely folklore relating to the Mythic Dynasty.

Upon her return, Aloysa and Kiji are approached by Ibankhkhnum, a captain of Pharaoh's guard.  He explains that he has been assigned to investigate the murder of the Wati guards (which the party had reported).  After interrogating Velriana and Uzoma, he investigated both the Wati gate and the Sanctum of the Erudite Soul.  From this, Iban has a lead as to the whereabouts of the suspected murderer.  Unfortunately, he cannot trust his own men to investigate--for the perpetrator may be a member of the Order of Medjay, a special branch of the royal guard.  As you had expressed interest earlier in assisting the investigation, Iban was hoping that he could call on the party now.

Your particular skills, he believes, will be an asset--for he is relatively certain that the murderers are hiding out in the Valley of the Princes, beyond the Pyramid of Sekh-pa-Mefer III.  Unearthed at the same time as the pyramid, the tombs in this valley remain untouched--only a few just outside the valley, in the shadow of the pyramid, have been looted.  In addition to not being able to trust his men with the identity of the murderer, he also cannot trust them not to damage history in their investigation.  An unbiased team including both an archaeologist and an inquisitor is ideal. 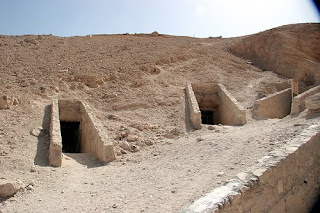 Peraten is the new capital of the empire. Construction of the city began under Atenhotep I, and was completed under his wife Moshet. Atenhotep II continues to rule Nefret from this city. Religious practices other than worship of the Aten are not permitted in the city. Believers of other traditions are permitted, and each is allowed to practice their own faith privately--but public displays of devotion (including spellcasting) are forbidden. Temples to other gods are not to be constructed; and the devout of any other tradition may not gather in groups of 4 or more.

The Valley of the Princes

The Valley is a dynasties-old burial ground for long dead, non-royal nobility.  It is located across the river from Wati and Peraten, equidistant from the two sites.  This necropolis was unearthed more recently than the Dead City.  The majority of the tombs have been carved out of the rocky cliffs in a natural valley near the pyramid, while others exists outside the entrance of the valley.  The only free-standing tomb is a pyramid outside the entrance to the valley.  Parties thwarted by the pyramid have sought to plunder the smaller, outlying tombs--but many of their treasures have long decayed, consumed by the kas of those interred.  Few, if any, have entered the valley proper.

The valley consists of three, connected corridors; each with distinct features:

Pyramid of Sekh-pa-Mefer III, also called the Pyramids of the Pharaoh of the Sphinxes, marks the entrance to the Valley of the Princes.  While not the oldest tomb at the site, it is the largest, and the onl one [supposedly] dedicated to a royal personage.  Our heroes are the only party known to have ventured inside the pyramid.  This tomb contains imagery of hieracosphinxes (haw-headed),

Tomb of Fen-Ra-Shep is located in the Eastern Corridor.  The only unusual tracks found in the Valley led to this tomb, and may be the hiding place of Ekram Iffek (see below).  This tomb contains imagery of canisphinxes (jackal-headed).

Ibankhknum (or simply Iban; male ramfolk fighter) is a captain in the ranks of Phararoh's guard.  He has asked the party to investigate a possible lead related to the murder of two Wati guards.

Order of Medjay is a special branch of Pharaoh's royal guards responsible for imperial level investigations, intelligence gathering, and the safety of Pharaoh and his immediate family.  A member of this order, Ekram Iffek, is a person of interest in the investigation of the murder of two Wati guardsmen.

The party accepts the job from Ibankhkhnum, and journeys straight way to the Valley of the Princes.  Deciding that the smaller, outlying tombs are not a likely hiding spot for a nefarious villain, they venture into the Valley proper.  After a brief encounter with a small pack of jackals, the party began to track a sha, leading them into the Eastern Corridor.  Following the aroma of an herb that changes scent based on pheremones released in its presence (a fact the party knew because of Pleebit's botanical expertise), the party came to the tomb of Fen-Ra-Shep.  Once inside, they encounted a sha, which caused Kiji to contract a disease of madness.

The source of the herbal aroma proved to be a sarcophagus "filled" with dried tannah leaves.  When consumed in the correct amount (brewed tea, smoking, or otherwise ingested), these leaves act as a potion of owl's wisdom.  The party was able to recover 8 doses of these herbs--after using one to temporarily treat the symptom's of Kiji's ailment.

Deeper in the tomb, our heroes found an unusual well.  Not only was it the only object to contain the name of the interred noble, but is also proved to be a navigable passage to a lower level.  Before exploring this second level, the part returned to Peraten to seek treatment for Kiji.

After healing Kiji of his wound-inflicted madness, the party returned to the Tomb of Fen-Ra-Shep to explore its hidden lower level.  Iconography of canisphinxes abound throughout this level--including a room with three more statues.

In one chamber, the party found the camp of Ekram Iffek.  Making use of Kiji's inquisitorial skills, they compelled a confession from the man.  He murdered the Wati guards because they were "in his way," and he did not want news of the artifact he uncovered to return to Peraten.  While he admitted to taking the Mask of the Sphinx God from the Tomb of the Erudite Soul, he was unable to divulge the mask's current whereabouts.  Despite admitting to the murder, Ekram's position as a member of the Order of Medjay means he cannot be arrested or even held accountable for the crime--for the order is far above the law that Iban represents.  The party, instead, convinced him to accept voluntary exile from Peraten.

Within the remainder of the tomb, the party found the sarcophagi of the dogfolk noble Fen-Ra-Shep and seven members of his family--including his beloved second wife, and his eunuch seventh son. Though hieroglyphs are abundant, most are unreadable; written in an archaic form of the sphinx language, these glyphs predate the dynasties of Nefret.  Aloysa took rubbings from various sections of the tomb to study later--perhaps giving the party a reason to journey to the Library of Tem-Akh in the near future.
Posted by ENC at 9:20 PM