There has been a delay in my intended Monvesia posting schedule because of an unexpected opportunity to run a Pathfinder campaign.  The regular Thursday-night AD&D game at the store where I work is moving to another night because of scheduling conflicts.  One of the players was bemoaning that she wouldn't be able to play, and she made an offhand comment that someone should run a Pathfinder game on Thursdays ... And I said "okay."

I've been wanting to run the Mummy's Mask adventure path for a while, but not in Golarion (the standard Pathfinder campaign setting). Instead, I wanted to create my own fantasy Egypt setting.  Adding Goodman Games' Lost Tomb of the Sphinx Queen and earlier Paizo adventure modules to the mix, I've got a starting point for a complex campaign world that characters can explore at their own pace.  I've just had to revise the backstories of all the adventures to fit my world (I won't be sharing any spoilers yet). 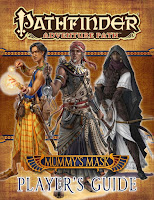 With adventure ideas in place, I began to choose available races and classes for the world.  For classes, I took the easy route:  allow nearly everything.  Well, everything from the Core Rulebook and Advanced Player's Guide.  Except for the Cavalier and Monk (with the caveat that a character could play one of these classes if they could find an in-world reason to do so).

For races, I wanted anthropomorphic options based on the gods of Egyptian myth.  The Advanced Race Guide proved to be an incredible resource in this regard, leaving me to create only two races (dogfolk and non-minotaur cattlefolk) ... which was also made easier by the ARG.  The traditional fantasy elves, dwarves, and humans all make an appearance as well--each also justified by a collection of Egyptian gods.  In most cases, alternate racial traits have been used to make this world unique(-ish).

To give the campaign an "authentic" feel, I chose historic Afro-Asiatic cultures for many of the races.  To remind the players that this is still a fantasy world, I also chose Mediterranean, Mesoamerican, and even Andean cultures for the rest (I've always wanted a world with Incan dwarves, so I figured this was my chance).  This combination of cultures could easily support an Atlantis sub-arc ... should the campaign venture in that direction. 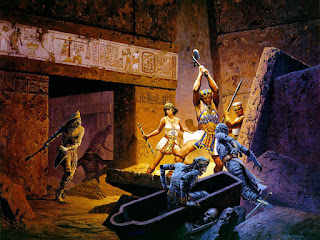 The result is the fantasy world of Nefret. Particulars about races and classes can be found in the campaign's ever-evolving Player's Guide.  As this campaign progresses, I will post tidbits and lessons learned.  You can follow this campaign via the "Nefret" tag.  As you will see from the Player's Guide, I will be experimenting with Eliminating XP--so expect a follow-up about that in the future as well.


If you live near Southern New Hampshire and are interested in playing in my Nefret campaign, visit me at Myriad Games: Manchester.

Monvensia is not lost, and I will continue to post about the world--as well as 5th Edition D&D in general.  What remains to be explored for that setting is mostly new monster stats.  As I have the time to develop the monsters, I will post about them.  I also promised a world map, which is still in the works.
Posted by ENC at 11:53 AM