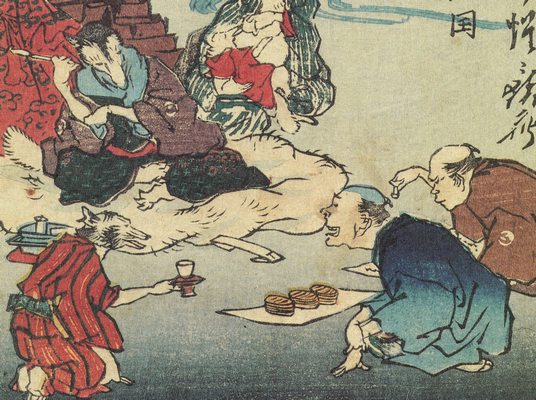 Tainted Counterpart: none; shifters were once humans who tried to prevent taint by giving in to lunacy.
Temperamental Association: Universalist; individual clans have their own temperamental associations (see below).

In their exodus from Desolation, humans passed through Neshu, Minotaur, and Tengu territories.  It was the Tengu who led humans to the mountain pass that would take them out of Raviq.  On the other side of the pass, the exodus entered a valley populated by enigmatic spirit folk--a race relatively new to Dragon Island.  The spirit folk knew of the HMDJVNW, and recognized the Taint in the humans that fled those great old ones.

The spirit folk offered to teach the tainted humans how to control their transformation.  Instead of orcs, these humans would become something new.  The spirit folk used the waxing and waning moon as a metaphor to demonstrate how the influence of the taint isn't constant.  They spoke of lunacy, the madness of the moon, and taught the tainted humans how to voluntarily succumb to it.  The combination of taint and lunacy transformed these humans into shifters--bestial humanoids capable of minor shapeshifting.

When the humans moved on to Nezumi and Hathi territories, the shifters (or hegeyokai "changing spirits") remained behind with the spirit folk.  As their forms settled, they gathered into six clans--each named for the beast that clan most closely resembled.  These clans would come to settle in their own villages amid spirit folk territory.  Today, the six clans continue to live among the spirit folk, though the population of the latter has dwindled greatly.


Fuhonese religion is centered on veneration of the spirit folk.  The emperor is considered both a temporal leader and something akin to a living saint.  The other races of the region (hengeyokai, nezumi, and tengu) all dedicate themselves to the emperor in their own fashion--the hengeyokai as a tribal military.

A cleric of the Emperor of Fuhon may select the Life, Light, Order, or Protection domain.  Therefore, this tradition is considered altruist.

The majority of hengeyokai are not samurai serving the daimyo, but commoners unconcerned with the notion of honor that drives their governors.  Family and clan remain a matter of personal pride to these shifters, though not as dogmatically.  Non-samurai shifters live close to the land, particularly among the animals they emulate.  They can originate from nearly any background.

The official shifter race has been presented in Eberron: Rising from the Last War, while the race has previous appeared twice before in Unearthed Arcana.  The shifter subraces are represented in Monvesia by the hengeyokai clans.  The clan names below are from the Fuhongo common language.

Two additional subraces (razorclaw and cliffwalk) had been included in the original 5th edition version of the race, but have not yet carried over.  Following the example from the Eberron source book, versions of these sub-races are presented below.

This sub-race is based on the "Cliffwalk" entry; renamed for thematic reasons--for many such animals are arboreal (particularly this setting's raccoon dog).

Ability Score Increase.  Your Dexterity score increases by 2, and your Strength score increases by 1.
Naturally Sly.  You have proficiency in the Stealth skill.
Shifting Feature.  While shifted, you gain a climb speed of 30 feet.

Razorclaw shifters are not much different than their Longtooth cousins.  Instead of fangs, however, the razorclaw have claws; these natural weapons deal slashing damage.  Only one unarmed strike bonus action is availabe, regardless of which hand (or foot) is used; to use the claws of a hand, that hand must be empty of object or weapon.
Posted by ENC at 1:03 AM