The warlock entry in "Mages of Monvesia" offered the briefest look at the Great Old Ones of Monvesia--a class of beings called the HMDJVNW (pronounced "am-DIV-new"), which had once been worshiped by ancient humans and goliaths in their homeland of Desolation.  Seven HMDJVNW were named in that early post, but little else was offered beyond these names and an epithet each.

In this post, I will take some time to explore each of the HMDJVNW, including their individual roles in the world of Monvesia.  Though these beings came to overthrow the giants and take over Desolation, they are daemon lords of Limbo--and as such have dominion over aberrations.


Behind the Scenes:  The name HMDJVNW is an adaptation of the initialism AMDIVNU--the the seven Temperaments, including Universalism.  Originally, AMDIVNU (whose name is always capitalized, and never replaced with a pronoun) was only one Great Old One; and AMDIVNU was once considered was the "god" of mages (or at least the originator of magic, see ENSHZRYD).  As the history of goliaths and humans has evolved with the setting, so has AMDIVNU also evolved--into the HMDJVNW. 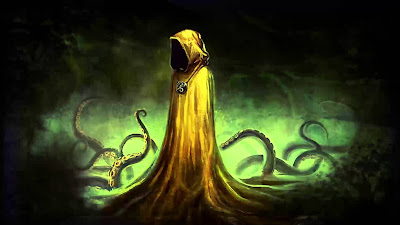 For the ease of reference, I will be using capitalized It pronouns for each of the Great Old Ones; and the capitalized They pronouns when discussing the HMDJVNW as a whole.  As these creatures are both genderless and inhuman, these pronouns should be ideal.

More than the simple shadow of elemental void, the "darkness" of DNXHINTN lives in and preys on the shadow mind of the pyche.  While NKNTHRAUL represents an individual's fear of others, DNXHINTN represents an individual's fear of oneself--an embodiment of each person's personal worse-case-scenario-self.  It takes the form of a pitch-black humanoid with no defining characteristics; It has no front facing, and its hands, feat, and individual digits can move just as easily forward and back.  It is drawn to compel the service of warlocks with dark dreams and desires.

ENSHZRYD was the first of the HMDJVNW to explore the arcane arts, inspiring early generations of human and goliath warlocks.  After the exodus, the other Great Old Ones were all but forgotten--so It was the only being recognized as HMDJVNW for several generations.  While the others have begun to make pacts with warlocks, ENSHZRYD remains the most common warlock patron.  It takes the form of a 6x6 grid of squares, the colors of which constantly fluctuate.  It is drawn to compel the service of warlocks with an inflated sense of self-importance.


The Seal of Mohas is a variation on Its form.  Mohas was drawing from imagery already extant in human culture in order to produce the icon for his temperamental philosophies.

In the beginning, there was nothing--and so FVINQRX makes claims at being the Eldest One (a claim naturally challenged by ZDRANYCH). It cares for neither law nor chaos, as both imply the existance of material or thought.  It takes the form of a giant sphere (of any size, as determined by the situation) devoid of matter, life, and energy; as It moves, existence is displaced around It, resuming natural order when It passes.  It is drawn to compel the service of warlocks with little to no drive or agenda, or else who are depressed.

It is the calm before the storm; it is quiet, too quiet.  JXTHALOTH is the embodiment of inertness, and the impeding surge of ativity that is soon to follow.  It is unease over what is to come--or over what has just occurred.  It takes the form of an un-moving pillar of smoke--black and grey and white.  It is drawn to compel the service of warlocks who are anxious and/or pessimistic.

NKNTHRAUL is the mastermind behind the Taint, drawing help from DNXHINTN and MYRQNL. By extending a fraction of Itself into the Dreaming, it created the psychosomatic ailment by preying on the fears Its "siblings" embodied.  It takes the form of an undulating cloud of inky blackness and shades of grey mixed with dark, cool colors (forest, navy, and plum).  In this form, it billows through a large portion of the Dreaming, powering the Taint.  It is drawn to compel the service of warlocks who are envious and distrustful of others--particularly those who might be convinced that the Taint is a boon.

A companion to DNXHINTN, MYRQNL represents those things a person intends on hiding--personality traits and desires that society abhors, or even traumatic memories.  It is all that one wants to be or are otherwise forced to be; It is what needs to be locked away and never revealed.  It takes the form of a writhing mass of knotted tentacles of varying colors (brown, black, red, green).  It is drawn to compel the service of warlocks with something to hide--from themselves, or from society.

Not only without end, ZDRANYCH is also without beginning.  It both exists and does not exist.  Some arcane scholars call It the first god, Death.  It is no psychopomp guiding souls to the afterlife, though. More precisely, It is the fear of the afterlife--embodying the sense of endlessness (torment or bliss) that comes after death.  It takes the form of an undulating Mobius strip, glowing with ever-flowing, chromatic energy.  It is drawn to compel the service of warlocks who fear death or other endings.

The existence of other Great Old Ones has yet to be confirmed--but remains a possibility.  These seven, however, are the greatest, most powerful, and/or best known of their kind.