In the lists that follow, the following source abbreviations are used: 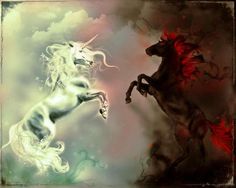 The remaining aberrations can be divided into seven rough "types" based on physical appearance.  These seven types can then be associated with the seven HMDJVNW.

The aberrations' home plane of Limbo is the chaotic mass of forgotten thoughts, dreams, and intentions--a twisted counterpart to the Dreaming.  These seven "armies" serve their masters with a sense of devout obligation.  By virtue of their very existence, they are thralls to their old ones--each with the illusion of independent thought.  The altruism of the flumphs, however, may point to a deep-rooted generosity in the old ones, or at least JXTHALOTH.

The empyreans are the dominant race of the Empyrean (the Aetheric Plane).  They respect the wisdom of the celestial serpents, ki-rin, and sphinxes; and they care for herds of pegasi and unicorns.  These celestials constitute the inhabitants of a a peaceful, pastoral plane caught in a state of eternal, idyllic bliss.  They live and act under the guidance and direction of the Virtues.


Treat the horned serpent as a couatl ("winged serpent") with a swim speed instead of a fly speed; instead of wings, it has stag-like horns.

Ordinarily, sphinxes are treates as monstronsities; they are celestials in Monvesia.

RETCON NOTE:  Originally, the cambion and succubus/incubus were reclassified as a divinity.  With this post, that reclassification is reverted.  The development of the transitive plane of Inferno has allowed these creatures to retain much of their original lore.  The divinity counterpart to the cambion is the nephil--though it uses the same statistics, it is treated as a different creature.

The rakshasa and succubi/incubi are the primary inhabitants of the Inferno.  The rakshasa are most loyal to the Spiritual Vices, while the succubi/incubi are most loyal to the Physical Vices.  The other fiends fall into line behind these races.  While there is conflict between these two factions, it is not one of open hostility; instead, it is competitive in nature.  Each faction seeks to drive mortals to follow different passions.


The traditional conflict between Demons and Devils is reflected in Monvesia as a competition between Spiritual and Physical Vices.