Just as the Ethereal Plane exists as two transitive planes in Monvesia, so does the Astral Plane.  Uniting them as a "companion" pair is Vaynon, the Dominion of the Far Wandering Star--a plane that exists simultaneously in these planes and the Material Plane. In this setting, these Astral Companions are the planes of thought (conscious and subconscious) and the planes of fantasy (dream and nightmare).


Generally speaking, spells and creatures that make use of the Astral Plane do so through the analog of the Dreaming.  Should a spell effect be destructive (ie. maddening), however, or a creature malignant, then the analog of Limbo is used.  For each unique instance, if it is necessary to know which Astral Plane is used, this is at the DM's discretion.

It is here that the Taint takes physical form as a writhing, inky purple mass that shimmers, pulses, and continually grows.  As the home of the HMDJVNW, Limbo is the ultimate plane of the Taint's origin; though it has long since spread into the Dreaming and even Vaynon.  Many psionicists, students of psychic power and mystic arts, believe that Vaynon has been completely consumed.

The far reaches of the transitive planes contain gateways of energy that act as gateways to the worlds beyond.  On the astral planes, these take the form of two-dimensional pools of rippling color, 1d6 x 10 feet in diameter.  These gateways can be identified by color:

Wisps of cirrus, streaks of stratus, and clumps of cumulus matter ranging a myriad of pastel colors drift aimlessly and chaotic through ambient florescent light.  This matter gravitates together most densely near the material plane, spreading further apart as a traveler gets closer to the Hierosphere and Hydrosphere.  Vaynon passes between these clumps of matter on its journey to Limbo.

Independent thoughtforms and muses build estates and empires on these cloud-like islands; while lesser thoughtforms drift aimlessly about the plane. 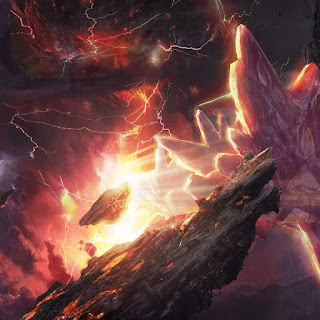 Where the Dreaming is composed of wispy matter, Limbo is filled with shards and clusters of crystalline formations--dark, smokey, and iridescent.  These multi-hued rocks drift through a field of inky, starless night.  Matter islands gathers near Orbimond, and spreads near the Elemental Planes.

Here, aboleths and flumphs "swim" in the void between landmasses; while piercers and ropers cling to crystalline caves.  While the seven HMDJVNW have migrated to Desolation on Orbimond, other Great Old Ones can be found gathering thralls and building cults in Limbo.