This post supersedes a portion of "Humans of Monvesia, Part 2: Uncommon Humans." 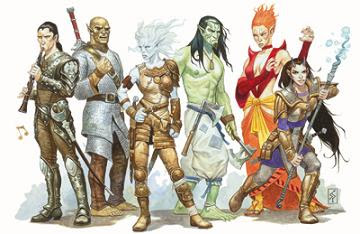 -----
Language Analog:  By human region (see "Humans of Monvesia, Part One")
Inspiration:  The Elemental Evil storyline is a good fit for this setting, given their mutual elemental fetishism.
-----

Tainted Counterparts:  none; genasi are immune to Taint
Temperamental Association:  By race/sphere -

Names:  By human region (see "Humans of Monvesia, Part One")

Genasi are a recent arrival, the first having been recorded in the last century.  The various Senarian churches do not yet have an official stance on them.  Some people venerate them as prophets of the Spheres, while others fear them as harbingers of destruction.  With the potential of elemental evil being on the rise, the latter may be closer to the truth.

Unlike half-orcs, planetouched are born as such to human parents.  Though they can be born wherever humans have settled, most genasi are from western Cuorria--the nations of the Helvet, Montaigne, and Ulvio.  Their heightened presence in this region may indicate a shift in elemental power here.

Genasi are capable off ascending to sainthood.  However, they are specifically barred from ascending to the Sphere in opposition to their own Sphere of origin.

To accommodate the six-elemental nature of Monvesia, two new subraces of genasi are introduced below:

RETCON NOTE:  Originally the Aasimar and Tieflings were used to fill the roles of the Light and Void Genasi, receptively.  These races have evolved beyond the original incarnations to fully embrace the common D&D cosmology.  Therefore, the time has come to explore new options for Light and Void player races.

As a light genasi, you have inherited the benevolence and prudence of the khodam.  To say a light genasi has an inner glow is a bit of an understatement; often, this glow can be overtly seen in their eyes, or even the palms of their hands.  Their skin tones can be milk white, golden, or even silver.

As a void genasi, you are descended from the brooding, pessimistic shaitan.  Void genasi typically gaunt with pale skin--though black and grey skin tones are also common.  They often have glossy black hair, or have heads wreathed in black smoke.  Void genasi voices are deep, quiet, and slow.