After uniting the petty kingdoms of Voztok under a single banner, Tsar Vasyl Vladovich Korolov (r. 890 ye - 105 ye) lived an unnaturally long life--long outliving his own children. Unlike Jostin or Ignatius, Vasyl did not ascend to sainthood.  Instead, he transformed his body into something new.

The Order of the Rose and Shield has perpetuated the rumor that Vasyl was a warlock sworn to the Undying patron.  The tsar's isolationist policies have allowed that rumor to spread and flourish.  Since the independence of Volka, however, a new rumor has surfaced:  that Vasyl was a a blood mage (or even a bloodline sorcerer).

During his life, Vasyl passed his secrets on to his grandchildren and other members of his inner circle.  These acolytes further spread what they learned, establishing a cult in Voztok--and, by extension, the Granitsa region of Cuorria.

Two institutions have thus survived Vasyl to this day:  1) The Dominion of Voztok and the Tsardom of Volka, remnants of Vasyl's empire; and 2) the Sanguinati, a faction that shares Vasyl's obsessions. 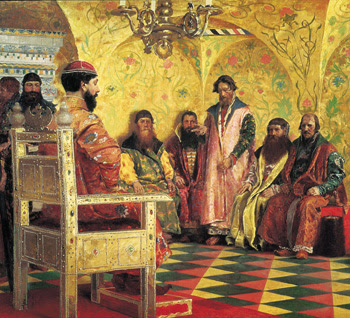 The Tsardom of the East (Tsarizm Voztoka) was originally divided into three Grand Principalities (Velikoye Knyazhestvo), each of which was under the direct authority of a Grand Prince or Grand Princess (Velikiy Knyaz or Velikiy Knyaginya). After the death of Vasyl's eldest son, the number of Grand Principalities increased to five--and the Tsar's direct involvement in government became greatly reduced.  In practice, the Grand Princes in Council acted in the name of the Tsar, seeking his approval (or veto) only in certain matters.

Today, the Tsardom is divided into the Dominion of Voztok (the majority of the Grand Principalities) and the Tsardom of Volka (an independent Grand Principality).  Since the war-less secession of Volka, the remaining Grand Princes in Council no longer seek Vasyl's approval for any matter.  It is commonly believed that Vasyl has abdicated his throne to the Council as a whole, with no one Grand Prince allowed to succeed him.  Some Cuorrian and Honderreicher nobles suggest that this is the reason that Grand Prince Ivan left the empire; that the division of the Empire was generally peaceful, however, has caused much confusion.

The Grand Princes of Voztok, from the children of Vasyl to today (italicized), are outlined below.  While Vasyl's own children ruled for moderate durations, every descendant since has had a long reign--though none as long as Vasyl's.

Though divided, the region is still shares Tsar Vasyl as a common historical and cultural icon.  To this day, the region is collectively known as the Tsardom of the East or the Tsarlands.

Blood Magic is the creation of Joshua Raynack and published by Alea Publishing Group on the Dungeon Masters Guild.  These character options were among the first to be spotlighted in Unearthed Arcana.  This pay-what-you-want feature is considered a sourcebook for the Voztok and Granitsa regions of Monvesia.

During the isolation of Voztok, a culture of blood magic prospered independently of other, older arcane traditions. Sorcerers learned how to tap into the magic of noble bloodlines, while wizards studied the magic literally pumping through their own bodies.  Both Bloodline Sorcery and Blood Magic [version 2, incoporating both Blood Component and Blood Channeler alternate features] are available in Monvesia, with their roots in Vasyl's legacy.  This also extends to the spells and magic items introduced in this document.

Among nearby dwarven settlements, the Bloodrage Savage has emerged.  It is unknown if this primal path has any real connection to Vasyl or his cult.  The proximity of its development cannot be mere coincidence, however.

The existence of Blood Thralls and Half-Spawn, both with strong ties to the undead and not Vasyl's blood cult, have yet to be proven in Monvesia.

The Sanguinati is a vitalistic faction operating in Monvesia.  Though it is most active in Voztok and in the Granitsa region of Cuorria, agents of the cult can be found throughout the known world.  Agents of the Sanguinati strive to develop power through magical transformation and selective breeding. They believe that each race can be brought near to perfection by encouraging the development of the most powerful bloodlines.  While they have no outright political agenda, their work inevitably interferes with houses and tribes already in power in their local areas.

Equivalent:  The Sanguinati does not have a direct equivalent among the factions of Forgotten Realms.  It shares token qualities in common with the Zhentarim.

Typical members of this faction include: blood mages (wizards), blood thralls (fighters), bloodline sorcerers, transmuters (wizards), as well as vitalists of all classes.  Anyone with a desire to attain power and encourage perfection are welcome in this faction.

To develop and preserve the most powerful bloodlines of each race; to seek out and encourage the development of the perfect race and the perfect being.

The process of transformation into a strig (see above) wipes clean the memories of the chosen, causing them to begin life anew as a 1st-level character.  No matter one's previous rank among the Sanguinati, the transfigured strig must re-establish his or her renown with the group.