In my last post, I introduced a Trickster base class for Pathfinder.  This class combines low-level elements of the rogue and wizard with the arcane trickster prestige class.  Though I am not the first to have created this type of hybrid, my version is particular to my current Pathfinder campaign--made for a specific player whose multi-classing placed his character behind his peers.

By crafting a new base class, it also gives me the chance to customize the class's spell list.  Like the Magus, the Trickster has a spell book that must be studied, but may only learn spells from his class list.  Spells were selected for this list base on reinforcing roguish abilities; over-the-top, flashy spells were either left our, or increased in level for this class.  As with the class itself, play-testing will likely result in modifications to this spell list.


There has been talk among my players about creating archetypes for this class as well--but we will see what our needs are. 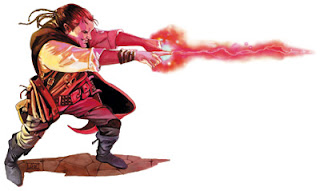 Links will be provided for all spells over time.
Posted by ENC at 10:49 PM