Simplifying Pathfinder: More than One Attack

While running my Nefret campaign and continuing to develop/convert my Monvesia campaign, I find the sleeker ruleset of 5th Edition very attractive.  Is it possible to create the same feeling for Pathfinder?  Possibly.

One major rules redundancy in Pathfinder (which is inherited from 3rd edition), is making more than one attack during combat.  Three rules systems operate simultaneously:  two-weapon fighting, natural attacks (including secondary natural attacks), and multiple attacks.  These rules are scattered throughout the combat chapter, each confusing the next. 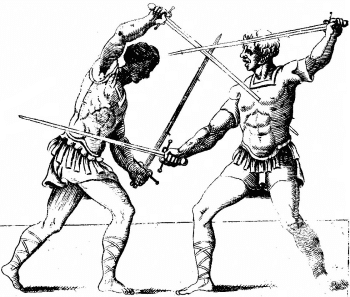 While these rules can be understood, they present a lot of exceptions and alternate circumstances.  The fewer circumstances you have to think about during the game--the less intrusive that the rules are--the more fun the game will be.  Therefore, I propose merging the concept of off-hand attack with the secondary natural attack.  These basics of this are:

The reasons for wanting to make this change are two-fold:
Below, I have copied the Pathfinder Reference Document texts relating to these rules.  I have struck through those portions of the rules these changes alter, and include the revised text in italics afterward.

Natural Attacks: Attacks made with natural weapons, such as claws and bites, are melee attacks that can be made against any creature within your reach (usually 5 feet). These attacks are made using your full attack bonus and deal an amount of damage that depends on their type (plus your Strength modifier, as normal). You do not receive additional natural attacks with the same attack for a high base attack bonus. Instead, you receive additional attack rolls for multiple limb and body parts capable of making the attack (as noted by the race or ability that grants the attacks). If you possess only one natural attack (such as a bite—two claw attacks do not qualify), you add 1–1/2 times your Strength bonus on damage rolls made with that attack when using it without any secondary attacks.

You can make attacks with natural weapons in combination with attacks made with a melee weapon and unarmed strikes, so long as a different limb is used for each attack. For example, you cannot make a claw attack and also use that hand to make attacks with a longsword. When you make additional attacks in this way, all of your natural attacks are treated as secondary natural attacks, using your base attack bonus minus 5 and adding only 1/2 of your Strength modifier on damage rolls. Feats such as Two-Weapon Fighting and Multiattack can reduce these penalties.

Here are the expanded rules for multiple attacks from the "Full Attack" section:

If you get more than one attack per round because your base attack bonus is high enough (see Base Attack Bonus in Classes), because you fight with two weapons or a double weapon, or for some special reason, you must use a full-round action to get your additional attacks. You do not need to specify the targets of your attacks ahead of time. You can see how the earlier attacks turn out before assigning the later ones.

The only movement you can take during a full attack is a 5-foot step. You may take the step before, after, or between your attacks.

Deciding between an Attack or a Full Attack: After your first primary attack, you can decide to take a move action instead of making your remaining attacks, depending on how the first attack turns out and assuming you have not already taken a move action this round. If you've already taken a 5-foot step, you can't use your move action to move any distance, but you could still use a different kind of move action.

Here are the rules for two-weapon fighting:

If you wield a second weapon in your off hand, you can get one extra attack per round make a secondary attack with that weapon if it is a light weapon. You suffer a –6 penalty with your regular attack or attacks with your primary hand and a –10 minus 5 penalty to the attack with your off hand when you fight this way secondary attack. You can reduce these penalties in two ways. First, if your off-hand weapon is light, the penalties are reduced by 2 each. An unarmed strike is always considered light. Second, the Two-Weapon Fighting feat lessens the primary hand penalty by 2, and the off-hand penalty by 6.


NOTE:  The Two-Weapon Fighting feat will work a bit differently, see below.

Thrown Weapons: The same rules apply when you throw a weapon from each hand. Treat a dart or shuriken as a light weapon when used in this manner, and treat a bolas, javelin, net, or sling as a one-handed weapon.

Which bring us, at last, to feats.  Instead of presenting the full correction as I did with the rules above, I will just give you the revised versions of those feats which have actually changed, or otherwise require revised wording.  In general, if a feat refers to an "off-hand weapon" then treat that as a reference to a "secondary attack."

Your mastery of the shield allows you to fight with it without hindrance.
Prerequisites: Improved Shield Bash, Shield Proficiency, Shield Slam, Two-Weapon Fighting, base attack bonus +11.
Benefit: When using your shield to make a secondary attack, treat it as a light weapon. Add your shield's enhancement bonus to attacks and damage rolls made with the shield as if it was a weapon enhancement bonus.

Striking with both of your attacks simultaneously, you can use them to deliver devastating wounds.
Prerequisites: Dex 17, Double Slice, Improved Two-Weapon Fighting, Two-Weapon Fighting, base attack bonus +11.
Benefit: If you hit the same opponent with both a primary and a secondary attack in the same action, you deal an additional 1d10 points of damage plus 1-1/2 times your Strength modifier. You can only deal this additional damage once each round.