In place of the material components of a spell (at least, those without a specified cost nor are consumed by the spell), a caster may use a spellcasting focus instead.  These foci come in three basic types:  arcane, druidic, and holy.  The Player's Handbook lists a few options for each of these categories.  Here, I will explore how the various traditions of Monvesia use these tools.


Crystals & Orbs.  Sorcerers are the most likely mages to make use of crystals and orbs, the exact type of which is determined by the Sphere of origin of their power:

Rod.  As noted for the Martial Sciences of Goliath Medicine, the focus used in that tradition is a plain, iron rod.  Giant soul sorcerers have also had luck with this focus. If necessary, this rod can be used as a light club.
Warlocks of the HMDJVNW bear rods that resemble the unearthly limbs of their patrons--tentacles, eye stalks, pincers, etc.
Warlocks of the Timekeepers use rods that are decorated with cogs, springs, and other anachronistic, clockwork elements.

Staves & Wands.  The archetype of the wizard's staff originates in Veldi Madjiq.  The madji were originally a subset of the priests of the Cult of Human Perseverance, bearing the emblem of the order atop staves as a mark of their prestige.
Nowadays, one can often determine how and were a Wizard trained by the appearance of one's staff (or wand).  There are constructed of proscribed woods, metals, and crystals and decorated in a manner that can indicate:  1) the academy or tower at which one studied; 2) one's field of study; and/or 3) one's level of authority at that institution (student, alumn, professor, or administrator).  Staves continue to be used as the iconic wizard's focus at the towers of the Kliemland and Waschbar; while the wand is more common among the academies of Montaigne, the Helvet, and Zyrndy.  The continued use of the staff in areas of the Honderreich is said to be Rakastan influence, while the wand was a Cuorrian innovation.
Wands had once been the stylish alternative the staff in all of Cuorria, but imperial sanctions against the outward use of the arcane arts limited its use to those areas outside of the Drajan Empire.  In addition to their use in the academies in the west, they are also used by wizards of Granitsa in the east--and, my extension, Voztok.  Here, wands are unique to each wizard--sometimes hand crafted during one's apprenticeship, and other times handed down across generations (bloodline or educational).


Similarly, wizards who do not use implements (favoring component pouches) were likely trained independently of any of the formal training traditions.  These wizards commonly train in Cuorria or Gierland, where revelation of their status as a wizard may be detrimental to their status (or their lives).

Notopolitan wizard staves are functional tools as much as they are arcane foci.  Their outward design resembles a measuring stick with a hook at the end--from which could be suspended a plum line or a lantern.
Galtish wizards have also been known to use staves as a way of separating them from the druids. There are no rules governing the appearance of their staves, however--and just as many do not use implements at all, preferring complex components instead.
Warlocks of the Archfey often favor natural wooden staves and wands.  They may also uses sprigs of mistletoe, holly, etc. (see below).

Silver Mirror.  While a luxury item for most, warlocks of the Deep Reflexions use silver mirrors as arcane foci.  The interpretation of "mirror" can be very loose, however--often taking the appearance of a mirror-capped wand or staff; or even a highly-reflective rod.

Qrish.  A bladesinger uses a qrish as both a weapon and an arcane focus.  The prestigious weapons, and the tradition behind them, are detailed in their own post.

Wand vs. Rod vs. Staff

In general, the difference between these three types of focus is length.  A wand is typically thin, and 12 to 24 inches long (though shorter wands are also known); they are commonly held by one end, adn wielded like a rapier.  A rod is thicker, and often 24 to 48 inches long; it an be held by its neck, or else by its end and wielded as a mace.  A staff is as thick as a rod, but is longer than 48 inches; it can be held by its "top" and used as a cane, or else at its center and used as a quarterstaff.

Totems/Fetishes.  Totems (perhaps more correctly identified as fetishes) crafted from fur, feather, bone, horn, shell, and the like are commonly used by the Galtic Druids of the Cicles of the Sheperd or the Moon.
Fetishes composed of the bones, scales, carapaces, and the like of river and lake creatures are used by Elfish Oracles of the Circle of the Fountain.
Large bones of big cats and herd animals are used as druidic foci by the Rakasta Shamans of the Circle of Twilight.

Amulet.  Amulets are by far the most common holy symbol / divine focus. These are utilized by: 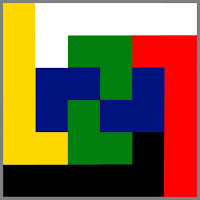 Emblem.  Engraving, inlaying, or even painting emblems on shields is common in the dwarven tradition--particularly for high caste Keepers serving Meomari. These emblems are cameo portraits of the Warrior paragon.
In the Honderreich and Cuorria, it is customary to paint the holy symbol of your order on a shield.  This was a custom adopted from the Dwarves, and later used by the independent orders of the Akhnapahr.  The Universal Orders in Communion with the Pontiff of Sena would standardize the practice among all their military orders. 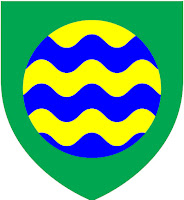 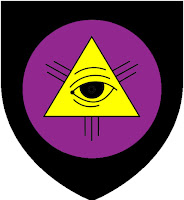 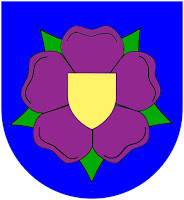 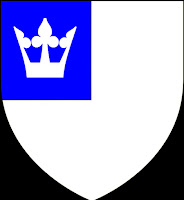 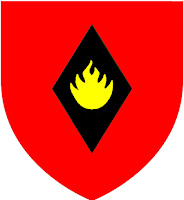 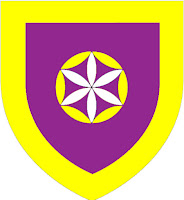 
The Chroniclers of the River (also known as the Chroniclers of Sand and River; shield shown top left) are unique among the ancient orders to use this practice because they operate in the Honderreich.

Reliquary.  Reliquaries contain the bones of a saint's companions, since saints are known to ascend to the Spheres.  They are often used by very old or very small orders, including:
The Cult of Human Perseverance makes extensive use of reliquaries, with the supposed bones of early human leaders having been passed down for generations since the exodus.

Rod.  As noted for the Physical and Mortal Scienes of Goliath Medicine, the focus used in that tradition is an iron rod.
The vajra of Anumat is a specialized rod (or decorative, two-headed club) used in the vanara tradition.
Posted by ENC at 11:38 PM