An emissary has arrived from Aloysa's tribe in Tamisha with letters of reference in order to grant the party access to the Great Chamber of Knowledge in the city's esteemed library.  Letters in hand, the party ventures forth into the library, to uncover whatever secrets they can about the Sphinx Empire, the Thrice-Divided Soul, or even the Hungry Cloud. 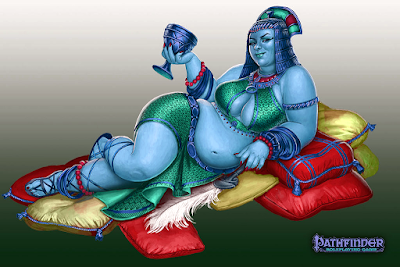 Tem-Akh was once the capital of the Three Kingdoms--until Atenhotep I declared a holy land for his new religion and moved the capital there. The city is divided into four districts, which were successive expansions to the city's limits.

Great Library of Tem-Akh is the city's crowning glory, a repository of all the Empire's gathred knowledge which also doubles as a temple to Thoth and Ma'at.  While access to the Outer Stacks is public, the domed Great Chamber of Knowledge required letters of reference from a high-ranking priest or scholar.  Access to the Spiral Archive beyond requires the permission of the governor.

Muminofrah's Barge is the center of social life for the elite nobility of Tem-Akh.  It his here, parked in the canal of Wadjet's Walk, that the city's hedonistic governor can most often be found--but one requires an invitation to enter.  That invitation is easily acquired, it would seem.

Temple of Ra, located in the Old City, remains the center of the old religion.  Since the counter-reforms of Atenhotep II, practice of the old faith is allowed to continue in the old cities of the empire--though such practice is not encouraged.  Includes the Sanctuary of Ra's Daghters, dedicated to Bast, Hathor, and Sekhmet.

The Tower of Ra's Glory was once a great spectacle in the New City--and from its spire at dawn at midsummer, one could easily locate the Vault of Hidden Wisdom.  Unfortunately, the tower was in disrepair and collapsed--and is now a construction site for Tem-Akh's first temple to the Aten.

The Vault of Hidden Wisdom is a mystery even to the curators of the Great Library.  As the city expanded, access to this private, external library became obscured.  In time, only the initiated could find it.  Now, it is accessible only by those who know how to look for it.  Who knows what horrors may have moved in since the curators ceased attending to it.

Crenn, the emissary sent from Tamisha, looks like no one anyone in the party has encountered before.  He appears is most ways human ... but has very fair skin, and antlers.  He claim to come from far away.  It seems there is more to Duat and Nefret than has previously been dreamt of in your philosophies.

Muminofrah is the governor of Tem-Akh.  As the highest ranking noble in the city, and by rights has access to the pharaoh's old palace.  While she may spend her nights there, she prefers to spend her days on a pleasure barge in the canal.  Permission from the governor is required for access to the Inner Sanctum of the Great Library.

Rabyah is a human fugitive who was promiosed protection by the governor Muminofrah.  Taking advantage of her position as Nyala's patron, Muminofrah asks the druid merchant to look after this poor, unfortunate soul.  Luckily, Nyala and Rabyah quickly form a bond of trust and mutual care.

After uncovering some minor propoganda about the Aten and noble families, it becomes clear that the Great Chamber of Knowledge is little more than a Great Chamber.  Catalog references to the Spiral Archive indicate that the party must seek access to the Inner Sanctum of the temple / library.  Leaving the bulk of the party to glean what else they can from the Great Chamber, Aloysa and Kiji venture to Muminofrah's pleasure barge.  The rotund elf takes a liking to the graceful catfolk almost immediately--and Aloysa plays her charms to secure access to the Spiral Archive without coming off as pushy.  Meanwhile, back at the library, Cecil manages to be his own, hyperactive distraction in order to steal the key to the Spiral Archive.  Come nightfall, when everyone else has retired back to the inn, Cecil stays behind to let himself in to the library and the archive--only to fall victim to a trap on the door.  Stumbling back into Wadjet's Walk, Cecil waltzes into a precinct of the Pharaonic Guard to return they keys he "found."  The next morning, the party explored the Spiral Archive, and its secrets--learning that the sphinx god called "Ra of the Horizon" is the Thrice-Divided soul, punished by the other netjeru.

The following day, the party returned to the Archive to do some more research--certain that they had missed something their first time through.  Aloysa suggests that Cecil visit Mumunifrah's pleasure barge to entertain the governor--and Nyala and Iban follow along.  Mumimofrah proves her hedonistic tendencies and humiliates the young elf.  Nyala then secures the governor as a patron for her travelling show of curiosities.  Back at the library more secrets are revealed--including a possible identity for the hungry cloud (a dark bennu), as well as the name of the Thrice-Divided sphinx god:  Hakotep (possibly an earlier incarnation of the Aten).  References are made to the Vault of Hidden Wisdom, where more information can be learned. Unfortunately, the curator of the Great Library are unable to help our heroes locate this lost library.  After securing permission to visit the Vault, the party also learns how to find it. 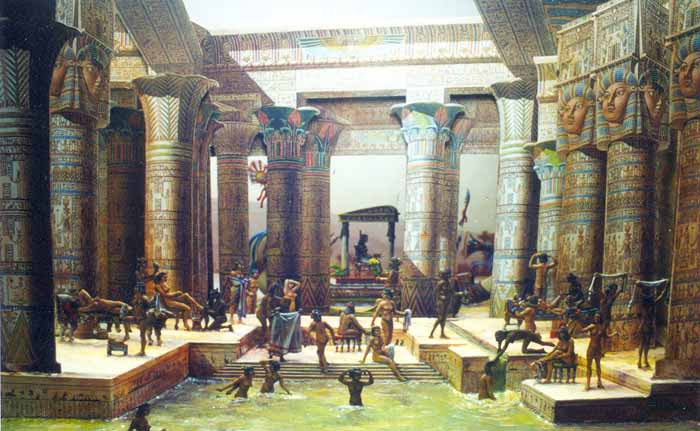 Flying to the height of the former height of the Tower of Ra's Glory, Pleebit and Jaeth combine their knowledge of nature and endgineering to determine the length of the tower's shadow on the appropriate day--to find the indicated site is now a bathhouse for the wealthy.  Combining physical and historical information about the site, the entrance to the Vault of Hidden Wisdom is located in the bath's frigidarium.  Scouting ahead, Cecil quickly learns that the vault is protected by clockwork golems--but is just too late to warn the party on his return, as the rest of the party made the same discovery.  While a tough fight, our heroes survived their encounter--though some only barely.

Still pumped with adrenaline after escaping four clockwork golems just before encountering four more with the party, Cecil babbles as coherently as possible about his finds----but ends up hyperventilating to the point of passing out.  With a basic layout of the vault sketched on a loose scrap of papyrus, the party moved on while Iban guards the prone body of Cecil.  The vault proves to be small--and defeating four of the golems has also deactivated the remainder.  In the vaults main dome, the party find little until the false ceiling is destroyed to reveal a mural depicting life in the Sphinx Empire.  The party uncovered a lead to a Sphinx-era tomb located in the Aerie of the Great Birds (bennu, dark bennu, and rukh), where lesser ammuts have been encoutered before.  IS this too good to be true.

Upon returning to their inn, two things are waiting for them:  a letter from an old comrade, and a human.  The human is Rabyah, sent from Muminofrah to Nyala for protection.  The letter is as follows:

My Dearest Allies and One-Time Companions:

We have too long been apart; but it is with a heavy heart that I wish you a belated welcome to TEM-AKH.  I greatly appreciate that you did not seek me out upon arriving int he city; my work with the Embalmer's Guild remains of a very sensitive nature that cannot yet be revealed.  Please know that you and the Guild are working toward the same ends; though deplorable, the actions of my guildmate left behind in PERATEN were necesssary.

Because of the familiarity we once shared, I come to you with a warning that may endanger my own life:  You must leave TEM-AKH as soon as you are able.  The Guild has become aware of your research into the THRICE-DIVIDED SOUL, and has chosen to take action against you.  Already, assassins have been dispatched.  I know you to owell to ask you to abandon your quest; I only hope that you respect me enough to heed my warning and leave the city.

I have come to understand that your newest companion has secured the governor MUMINOFRAH  as a patron.  Please understand that her authority here is not as total as she may believe.  While Pharaoh may tolerate the practice of the old religion in TEM-AKH, MUMINOFRAH's hedonism is not equally tolerated.  Her humiliation of CECIL should demonstrate to you the depths of her depravity.  While the governor may be an ally today, you may not be able to count on her in the future--and certainly not against the Guild.