In the downtime after recovery of the Mask of the Sphinx God, Ibankhkhnum (and his pet jackal Pawet) joined the party.  Among the various benefits to having a former captain of Pharaoh's Guard in the party is the intelligence he can provide about the factions working in the government.  During an early conversation with him while traveling to Tem-Akh, Iban clarified the structure of military power in Nefret.

In the absence of open warfare, most guardsmen are civil defenders keeping the peace in major cities.  Each corps of the Guard also maintains a "navy" that patrols the rivers; while the corps of Lower Nefret also maintains a sea-going navy that is often at odds with human fleets.  During open war, guardsmen serve as officers and sergeants of conscripted soldiers. 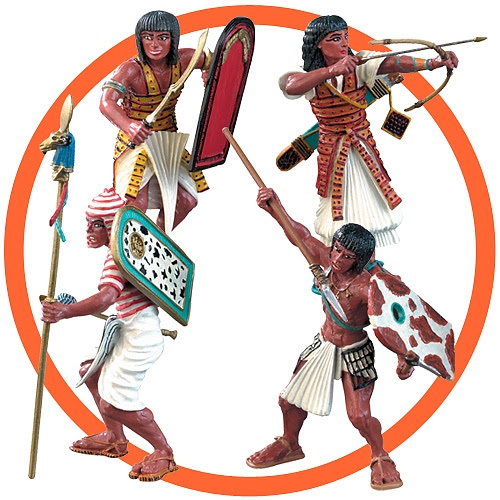 Order of the Medjay

The Order of the Medjay (pronounced med-JIE) is a national security and intelligence organization that "protects the interests of the Pharaoh."  Among their duties is protecting the royal family as well as sites of political (and religious) importance.  In order to serve as efficiently as possible, the Order is governed by the Council of Viziers--Pharaoh's chosen advisers--and not directly by the Pharaoh.  While any individual vizier may give orders to the Medjay, the Grand Vizier may overrule any other vizier--and even take full control of the Order.

The order originated during the collapse of the Empire, when the peripheral nations broke away from the Pharaoh's control in the Fourth Dynasty.   It is as much a matter of folklore as it is history:  The Medjay were one of the few human tribes who fought against Nefret before the Myriapoli were granted their independence.  Though the Medjay ultimately lost the battle for their freedom, they fought fiercely enough to impress the Pharaoh.  The Grand Vizier offered to let the young and infirm of the tribe live--and be allowed to pass on their tribal traditions--if all able-bodied members of the tribe for generations to come agreed to defend Pharaoh as valiantly as they defended themselves.

To this day, the vast majority of the Order is human--though few claim descent from the original Medjay tribe.  The rare non-human to serve in the Order is always of a foreign-born race--native-born Nefretians are only eligible to serve in the Guard.  Iban had been offered a place in the order early in his training, but he turned it down on moral grounds--for he believes no one is above the law.

Because of the individual natures of these two organizations, they interact with each other in peculiar ways:

Officially, the Medjay are above the law, while the Guard is bound to it.  A member of the Order may openly break the law without recompense, so long as the act is justifiable in "protecting the interests of the Pharaoh."

Any given Medjay effectively outranks any Guardsman of equivalent authority--such as Meret-Hetef outranking Ibankhkhnum, even though they both served as captains in their respective organizations.  It was this inequality in rank that led, in part, to Iban's discharge from the Guard.