I have spent years converting, building, and expanding my homebrew Dungeons & Dragons setting for that game's "5th Edition."  Previously, I has played the setting using the Rules Cyclopedia version of D&D, later converting to the Pathfinder RPG.  Over the last couple of years, I have spent more time "ret-conning" the setting, and editing older posts as new 5th edition material has become available instead of writing new content.  I believe the time has come to refocus, simplify, and re-present the setting--particularly now that the ruleset of 5th edition has matured enough to accommodate many early aspects of the setting.
Just as much of the setting is going to change as it is going to remain the same.  While the high concepts of the setting will remain, how they represent and are represented by the game rules will be altered.  The Six Spheres, Temperaments, Taint, etc. will be present in more simplified manners.  Dragon Island, its subcontinents, and the other regions will be populated by the various races of the game in ways that were not as originally presented--and more careful planning will be put into spreading the variety of races and the availability of class options available to them.
Many elements will be subject to removal, simplification, and revision.  The relationship between Temperaments and Alignments will be revisited, and a model that allows both may even be explored.  The re-classification of creatures will be abandoned, and the intentional omission of particular creatures will be revised.  If a game element exists in core D&D, then it will have a home in Orbimond without extraordinary conditions or mechanical modifications.
Read more »
Posted by ENC at 6:11 PM No comments:

RETCON NOTE:  This is the first of two posts replacing "Elves of Prace and Xahaca."  This post also replaces "Neshu of Raviq."

In the world of Monvesia, the transitive planes are known as Otherworlds--homelands for those beings called daemons.  Eight in total, these planes are bound to companion pairs sharing common Spheres and Dominions.  While humans can develop a connection to one of these planes, there are other mortal races which have been born from them (though remaining "native" to Orbimond).  Four in total, these races are each the product of a pair of otherworlds, and they demonstrate the same Temperamental variation as humans.
These races are:
As a whole, these races have alien cultures that often confound their neighbors.  They even consider themselves different than their mortal companions.  Conflicts involving these races are typically internal--each race consisting of rival factions.  Even their religious traditions exist beyond the common saints of the Spheres.  Furthermore, their otherworldly origins make them immune to the Taint, which otherwise plagues the moral races.
As a class of race, they share many commonalities--but their specific planes of origin separate them drastically from each other.

Mastery of the arcane arts can be achieved by strengthening one's connection to the Spheres of Power.  While some mages make pacts or embrace an inborn otherworldly nature (see malefactors), a dominant majority do so through years of research, experimentation, and formal study.  These scholars view themselves as "true" mages, and often argue that they are the more powerful of their kind.  These include the industrial Artificers and the academic Wizards.

This class is detailed in Eberron: Rising from the Last War.

From a Pracian perspective, the ways of artifice began with the dwarves and gnomes (and, presumably, neanderthals).  Humans would learn the arts from them, and spread them throughout the Monvesien Valley to the other races of Prace.  In Henjal, artifice is as old the the scalikind Empire of the Morning and Evening Star--whence it spread from the Forest of Vines to the Sea of Fuhon. While in Raviq it was practiced by an elite, priest-like caste of revered craftsmen.  Fuhonese artifice is a unique blend of all three traditions, since the korobokuru would have brought their Pracian tradition with them.

Alchemists are by far the most common artificer.  Local traditions of alchemy can be found throughout the regions Monvesia, each with their own names and customs.  This specialty forms the basis of the Natural Sciences of Goliath Medicine.

Battle Smiths and Armorers (Unearthed Arcana) are tied as the second-most widely known artifice specialties.  The two are just as often seen working side-by-side (particularly during times of war) as they are rivals.

Artillerists are a closely-guarded dwarven secret in Prace--though the korobokuru in Fuhon have been more willing to share the art.  In Henjal, kobolds have independently developed their own artillerist tradition; it is meant to be secret, but a drunk kobold can't always keep such secrets.

Mastery of the arcane arts can be achieved by strengthening one's connection to the Spheres of Power.  This can be approached through formal study (see scholars), or else through otherworldy pacts or natural power.  The latter typically exist outside of "accepted" society, and are therefore called malefactors--commonly understood as "evil-doers," though originally meant to mean "incorrect doers."  There is nothing inherently evil about the sorcerer or warlock.

Different races have their own traditions "explaining" the nature of sorcerers.  To an extent, each version of the sorcerer story is true.  That is, these different versions of what a sorcerer is represent the sorcerous origins common to that race's history.

According to the omnipresent Senarian churches of the humans in Prace, sorcerers are possessed of an inborn connection to one of the Spheres.  While all adherents of the elemental philosophies believe that every being has such a connection, it is the sorcerers who have accepted it and gained power from it.   A sorcerer's elemental connection may be tied to his or her race (or culture, if human), personal philosophy/temperament, season of birth, etc.--but it does not define every aspect of the character.  Two origins reflect this:  Shadow Magic (Xanathar's Guide) and Storm Sorcery (Sword Coast or Xanathar's Guide).


Until such time as other, official origins are introduced, these two can be used to mimick the other elements.  Use Shadow Magic for Light Magic: reversing references to necrotic and radiant damage as well as darkness and light.  Use Storm Sorcery for other primal elements, such as Flood, Quake, and Wildfire Sorcery:  use alternate damage types and movement speeds as appropriate.


Among the successors races of the Empire of the Morning and Evening Star, it is said that sorcery is the result of having had a Dragon Ancestor.  This connection is not necessarily one of direct ancestry, but could represent a bloodline having been favored by one of the dragon lords of old.


Remember, there are only six types of dragons in Monvesia--each associated with one of the elemental forces of one of the Spheres.  Therefore, this is one origin that also follows the Temperamental beliefs of the Senarian churches.  (An early version of 5th Edition Monvesia used a variation on the Dragon Ancestor to represent Elemental Magic).

In the land of Desolation in Raviq, the HMDJVNW have taken control and cursed the native races into submission with a psychosomatic ailment known as Taint.  This cure is so potent in Desolation, that even the land, the neighboring Frenetic Ocean, and magic itself have become warped.  Some who have been affected by the Taint have also gained a connection to the Wild Magic that was released into the world because of it.

There are warriors whose power and ability exist beyond mere training as men-at-arms.  Though paladins draw power from their faith and rangers from their esoteric knowledge, these classes are not much different than the fighter class--even the point of demonstrating many of t
he same combat styles.  Barbarian and monks, however, are more ascetic in their approach to empowered combat.  These classes have a more mystic appreciation of the combat arts.

The designation "mystic" is borrowed from the Rules Cyclopedia, which uses the term for its version of a monk-like class.  It is not to be confused with the Mystic class which has been presented as an optional psionic class.

Barbarians are spiritual warriors from various traditions.  While each path is bound to a particular culture, followers of those paths are not bound to those cultures.

Totem Warriors often emerge from Galtic druidism, which is a naturalistic faith that venerates alimal guides and guardians.  These sacred warriors typically accompany and protect druids of the Circle of the Shepherd--though many barbarians of this path exist beyond the religious community as well.


New options for the totem warrior can be found in the Sword Coast Adventurer's Guide.

The Beast (Unearthed Arcana) draws on the same Galtic tradition as the Totem Warrior; with sacred warriors of this path more commonly associated with the Circle of the Moon.  As with their counterparts above, barbarians of this path are not bound to "religious service" (though they are often considered the equivalent of Paladins).


The Shepherd/Totem and Moon/Beast dichotomy among Galtic druidism may represent an orthodox/heterodox schism in the original tradition.  Which as much as the tw denominations have in common, they are dissimilar in  in key doctrinal and practical areas.

In the west, there is a tradition of deifying the leaders of empires.  Clerics may serve these rulers and the cults of their glory as if they were gods or saints.  These traditions are formalized cults of personality.  These priesthoods are long-standing, but the "living saints" they venerate change over time.  Three god-kings have risen to prominence:  the Pharaoh of Raviq, the Mikado of Fuhon, and the Nagaraja of Henjal.

Clerics of the God-Kings

When in service to a god-king, a cleric must choose a domain from those spheres related to the ruler's dominant alignment.  Keep in mind, however, that inheriting the mantle of a god-king will affect one's alignment points:


Should a god-king have no clear dominant alignment, then the spheres of the title's temperamental association should be used.

No discussion of human culture and history is complete without exploring the Cult of Human Perseverance (which would come to be adopted by non-humans as the Cult of Perseverance).

This religious tradition began as a reaction against the HMDJVNW, who once dominated and demanded the piety of the proto-human-goliath race.  Having found the "gods" to be terrifying beings from which emancipation was necessary for survival, both the humans and goliaths developed athiest religions during their respective exoduses.  For the goliaths, religion became the veneration of rudimentary (and highly superstitious) science and medicine.  For humans, it became an early codification of temperamental psychology and philosophy.  In its early stages, this temperamentalism was void of the canonization of sanctified beings. 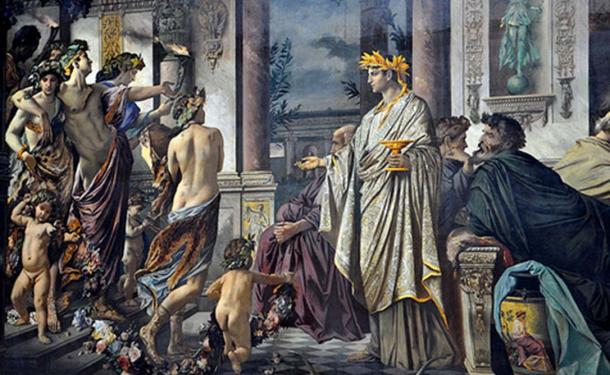