The subcontinent of Prace is the "known world" of Monvesia.  Over the centuries, several peoples have carved out their "own" territory here.  Often, these territories overlap; and in several cases, once-great territories have been severely diminished.  Originally, only the dwarves, elves, and rakasta (and, possibly, firbolgs) were native to Prace.  Gnomes developed from dwarves; while humans, goliaths, lizardfolk, and vanara migrated into the land of the Great River and beyond.  Today, Prace is a culturally dense subcontinent. 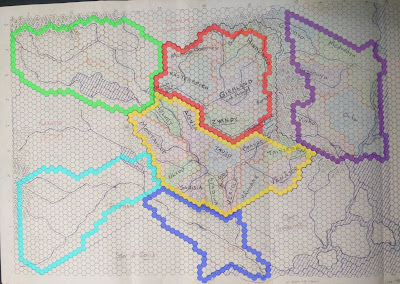 The humans of Monvesia can be roughly divided into six cultural groups, each with its own common langauge.

Monvesia RetCon: By Any Other Name

RETCON NOTE:  Several posts have been modified to incorporate the new names and naming conventions presented below.

What's in a name? That which we call a rose
By any other word would smell as sweet ...

Monvesia is the name I have used for this campaign setting as a whole since its inception.  However, the crude map posted earlier shows that the territory I've been exploring is part of a much larger world.  As my vision of this world expands, incomplete settings from the past have started to fold into it.

In the past, I had developed a top-down setting that included three major world regions--though I never developed much local flavor.  I realized that the world of Monvesia is also built on a similar fashion: the Monvesien valley, the Forest of Vines, and Desolation are iconic locations in three, distinct subcontinents of a larger landmass.  I have chosen, therefore, to take the names of these subcontinents from that earlier setting:  with the Monvesien valley in Prace, the Forest of Vines in Henjal, and Desolation in Raviq.


These three subcontinents represent different archetypes of fantasy gaming:  Prace for eurocentic fantasy adventures, Henjal for "Oriental" adventures, and Raviq for "Arabian" adventures.  Crossover between the worlds is not only possible, but both encouraged and expected. 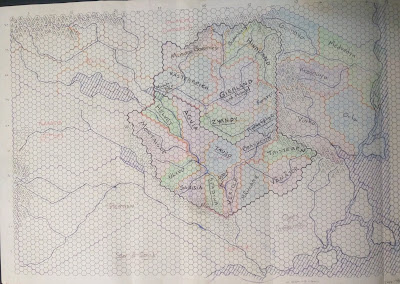 To date, this is the only map that exists of the known world of Monvesia.  It  has taken a while to upload because I had originally intended on upgrading the map using Hexographer--but I lost the map before that process could completed.  While I still hope to use Hexographer to create new maps for this world, I'm going to let this re-discovred map stand as is.

It shows all of the human (and most non-human) regions of the known world, as well as subdivisions of the Honderreich, Cuorria, and Voztok.  There are even features now out-dated--such as calling out the goliath homeland of Inheritance as "ogre" territory; and referencing the capital city state of the Empire as Dray, not Sena.  The borders seen here are no longer accurate--but the rivers, coasts, and highlands are.

The dominant feature of the region is the Monvesien (the Great River) and its tributaries.  The setting of Monvesia shares its name with this drainage basin--though the map depicts the greater region of Prace.  The major regions and tributaries of the River are discussed below.

The Seekers of Monvesia are called Muses.  Instead of coming from the ranks of the gods, they are the archdaemons of the Dreaming, powerful egregores of knowledge:  the Trivium of humanities (Poeia, Philosophia, Theologia) and Quadrivium of sciences (Arithmetica, Astrologia, Geometria, Musica).  While the Trivium seek to understand Why the world works, the Quadrivium seek to understand How.

Unlike the other archdaemons, the Muses do not have a "standard" physical form; each person who sees them sees what they want to see.  Nearly all who have encountered these Muses agree that they are female--but each describes them as being the epitome of their own race.  The only other common attribute from all accounts is the color of each Muse's robes.

There are more Muses than those detailed  below.  These include the matriarchs--Grammatica (mother of Poeia), Logica (mother of the Quadrivium), and Rhetorica (mother of Philosophia and Theologia)--who are so ancient and powerful that their interest in mortals has diminished.  Many of the Muses below are matrons themselves, with daughters and grand-daughters; these younger generations, while powerful enough to inspire mortals in the arts and sciences, are not powerful enough to patron warlocks or sponsor saints.
Read more »
Posted by ENC at 7:37 PM No comments:

In place of the material components of a spell (at least, those without a specified cost nor are consumed by the spell), a caster may use a spellcasting focus instead.  These foci come in three basic types:  arcane, druidic, and holy.  The Player's Handbook lists a few options for each of these categories.  Here, I will explore how the various traditions of Monvesia use these tools.


Crystals & Orbs.  Sorcerers are the most likely mages to make use of crystals and orbs, the exact type of which is determined by the Sphere of origin of their power: