Plane Shift: Amonkhet treated us to another therian race in D&D:  the dogfolk.  This race specifically takes the form of the Khenra--jackal-folk prone to twin offspring.  While this particular race is unique to the world of Amonkhet, the idea of dogfolk has been common to gaming for decades.  In BD&D, we had two versions:  the Lupins (the foil to and rivals of the Rakasta) as well as the isolated Hutaakan.  Just as with catfolk in my previous post, I will explore the possibilities of dogfolk subraces. 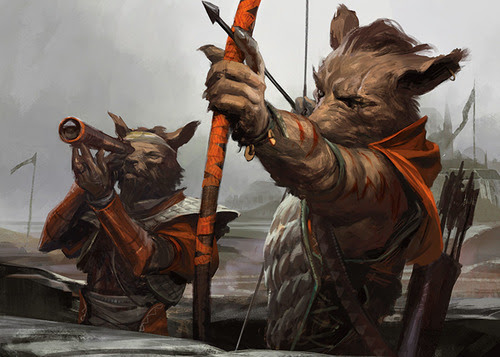 To play an alternate dogfolk subrace, disregard the features identified below as being specific to the khenra. Instead, apply the traits of your chosen subrace.

Khenra are unique to the world of Amonkhet, one of the many planes of Magic: the Gathering.

Lupins, or "Hunter Dogfolk," resemble wolves, coyotes, golden jackals, and African wild dogs.  They are pack hunters who tend to value the group over the individual.


In the Nefret campaign, these would be the Wapwetites.  These stats can also be used for the Wolfen from Palladium Fantasy; they could also represent the Abzan Ainok from Magic: the Gathering.


Ability Increase:  +1 Strength
Pack Hunter:  Choose an ally to be your packmate. If your packmate is alive and you can see your packmate, whenever you roll a 1 on an ability check or saving throw you may reroll the die. You must use the new roll. You may choose a new packmate whenever you take a long rest. Your chosen packmate does not gain the same bonus.


The pack hunter trait is a variation on the khenra twins trait--but is adapted to make it more universal.

Hutaakan, or "Guardian Dogfolk," resemble sub-Saharan jackals and dholes.  They are a deeply religious people with a strong sense of faith.


In the Nefret campaign, these would be the Duamutites.  These stats could represent the Temur Ainok of Magic: the Gathering.

Shafolk resemble the mythic sha--having reddish fur, lean bodies, squared ears, and a forked tail.  They are a suspicious and often paranoid people.

Ability Increase:  +1 Constitution
Waste Walker:  Due to centuries of adaptation to desert climates, your race has become accustomed to heat; you are resistant to fire damage.

As much as I adore therian races, and have already been convinced to add monkeyfolk to the world, I do not yet want to explore how dogfolk might fit in Monvesia.   I could easily add them to the Forest of Vines "continent," but I don't want to force their inclusion.  A great number of races already inhabit the world, and each has an established place in its history.  The world has been based on players' interaction with it; so the dogfolk could only be a possibility if a player expressed interest in the race--and their place in the world would be determined by the intended campaign.
Posted by ENC at 6:06 PM