Nefret, Chapter 4: Risen From the Sands

A letter has arrived at the Tooth and Hookah for our party of heroes.

It is with deepest regrets that I must take my leave from you all for an indeterminate period.   The work I have been doing for the Embalmers' Guild--of which I am not at liberty to disclose--requires me to travel to Tem-Akh.  My duties there will require my full attention.

It has been a pleasure working with you all.  I do not know when, or even if, I will be able to join you again.  Should our paths cross, I look forward to that meeting.

Rumors throughout Peraten indicate that specially trained embalmers from throughout the city (and even elsewhere) have been recalled to Tem-Akh, the old capital.  As with Nephethus, many left before giving any indication that they would be gone for some time.  Some notices included requests not to follow.  The other embalmers who remain in the city to provide funerary services either feign ignorance of the "recall," or else refuse to discuss it.

With Aloysa gone as well--having briefly returned to Tamisha (the catfolk homeland) on a personal errand--the party's strength is greatly reduced.  Those that remain are each raptly engaged in their own work:  Cecil spending hours pouring through the hermit's scrolls; Kiji exploring the politics of the quarry shrines; Pleebit attending to his garden; and Jaeth training body and soul.

Though they have their attentions focused on their own goals, each is also drawn to test their mettle against another site.

Peraten is the new capital of the empire. Construction of the city began under Atenhotep I, and was completed under his wife Moshet. Atenhotep II continues to rule Nefret from this city. Religious practices other than worship of the Aten are not permitted in the city. Believers of other traditions are permitted, and each is allowed to practice their own faith privately--but public displays of devotion (including spellcasting) are forbidden. Temples to other gods are not to be constructed; and the devout of any other tradition may not gather in groups of 4 or more.

Catacomb Sanctuaries are located in the old quarries outside of the city limits. Here, worshipers of Anubis, Horus, Isis, Nephthys, Osiris, Ra, Set, and Thoth can be found in caves long abandoned by the workers who built the temples in Peraten. These shrines are maintained by the followers of these faith, having no priests of their own--though traveling priests are often asked to offer blessings to the faithful at these sites.

Valley of the Princes

The Valley is a dynasties-old burial ground for long dead, non-royal nobility. It is located across the river from Wati and Peraten, equidistant from the two sites. This necropolis was unearthed more recently than the Dead City. The majority of the tombs have been carved out of the rocky cliffs in a natural valley near the pyramid, while others exists outside the entrance of the valley. The only free-standing tomb is a pyramid outside the entrance to the valley. Parties thwarted by the pyramid have sought to plunder the smaller, outlying tombs--but many of their treasures have long decayed, consumed by the kas of those interred. Few, if any, have entered the valley proper.

Pyramid of Sekh-pa-Mefer III, also called the Pyramids of the Pharaoh of the Sphinxes, marks the entrance to the Valley of the Princes. While not the oldest tomb at the site, it is the largest, and the only one [supposedly] dedicated to a royal personage. Parties that have ventured to the site have tried to enter the mortuary temple, but have been thwarted by the undead.

No additional persons of note.

While the disappearance of the embalmers remains a mystery, it is not one the party is in a position to explore at this time.  With Aloysa away, it is best not to venture too far from Peraten until her return:  so the boys choose to dive headlong into the Pyramid of the Pharaoh of the Sphinxes.  The Pyramid proved to be filled with one obstacle after another, leaving the boys to spend the night at the bottom of a pit trap while they reassessed their resources (and spells).  Cecil was almost lost to a mimic disguised as a sarcophagus--but Kiji's heroics saved him at the last minute.  In the end, treasures recovered at the Pyramid did not match the dangers faced.  Perhaps there are other secrets to this pyramid yet to be uncovered. 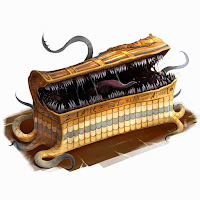 Treasure gathered to date has allowed the party to remain at the Tooth and Hookah at their own expense--where the boys await the return of Aloysa.  While they wait, they are able to experience one of the holiest festivals of the Aten:  the Great Feast of the Sun's Bounty.