The Kingdom of Montaigne is one of the "independent" nations of Cuorria--referred to as such because it is not part of the Divine Drajan Empire.  The Empire had once sought to rule all of Cuorria, and even sent troops into outlying regions (including Montaigne) and occupied them for a time.

Montaigne is subdivided into four marches and several counties.  The marches are each governed by a marquis, while the counties are governed by counts and viscounts (depending on size and importance).  These are vassals of the King Roland of Montaigne.  The king has aspirations of adding Ulivo and Sabbia as duchies under his sovereignty, but these nations have not yet given in to his offers.  The Helvet was once offered the same, before it joined Waschbar. 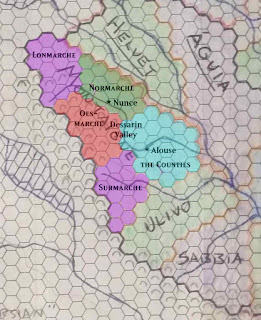 Lonmarche is the furthest march from the capital in Alouse.  It is also the most recently acquired.  Once part of the Pridelands, Montainese settlers became more common in the region than its rakasta natives.  In a treaty with the great pride of the region, the King of Montaigne agreed not to expand his territory across the Tjakeer Highlands to Lake Myansima in exhange for this march.

The Tjakeer Highlands that form the western boundary of Montaigne form are known as the Montaignes Espade ("Sword Mountains") to the Cuorians.

Normarche is the most populous of the marches.  Its central city, Nunce, is home to the royal summer palace--and the surrounding countryside is the seasonal home of various other noble families from the counties.  Many of the new counties established in the last decade were centered on estates in this region.  Normarche is commonly known as Montaignese Wine Country.

Oesmarche is dominated by the Montaignes Espade--the first Montainese claim of the traditionally Rakastan highlands.  An aslanasta pride continues to live in the region, retaining loyalty to the rakasta while still recognizing the sovereignty of King Roland.  The njan of this pride is the nominal marquis of the region, though a hereditary vicomte acts in this capacity on his behalf.

Surmarche is often cited as being "quaint" and "rustic" by the nobility of the counties.  Those who rule here have a closer relationship to their subjects than the nobles elsewhere in the kingdom.  Several religious orders have made their home here.  Surmarche is known for its cheese.

There are over two dozen counties in the core territory of Montaigne, each rules by a comte by the grace of the King.

The city and surrounding territory of Alouse is royal territory.  The royal estate is located outside of the city proper--though a palace is maintained within the city.  Many barons in the area are distant relatives of the royal family.

The Dessarin Valley is composed of three counties:  Yartar in the north (the most populous of the counties);  Helve in the central valley (ruled by Count Silmerhelve from his estate at Helvenblade), and Amphail in the south (once governed from Rundreth Manor).  They are roughly separated by the Dessarin and Sumber Hills.

The Union of Ulvio and Sabbia is growing weak.  As Pontiff Auguston's popularity grows is Spadina and Vericce, the nobility in Sabbia (which favors a strong and poerful Church) is becoming more sympathetic toward the Empire.  The King of Sabbia has petitioned the Pontiff to sponsor his return to the Peerage of the Empire; should the happen, the Duke of Ulivo will almost certainly accept the offer of Montaignese peerage.
Posted by ENC at 11:15 PM