Nefret, Chapter 7: Sepulcher of the Servant

Ibankhkhnum has gone missing. The last time you saw him was at Kiji's trial.  After your meeting with Natari, you had hoped to check in on the Wati murder investigation--but Iban could not be found.  Asking around among the other guards, you encounter only vacant stares are closed lips.  Of the two other guards participating in the investigation, one was as unhelpful as his peers--though he let his terror be more obvious.  The other, however, is unable to speak as his tongue was removed (an act reserved for convicted heretics and unwelcome witnesses of state secrets). 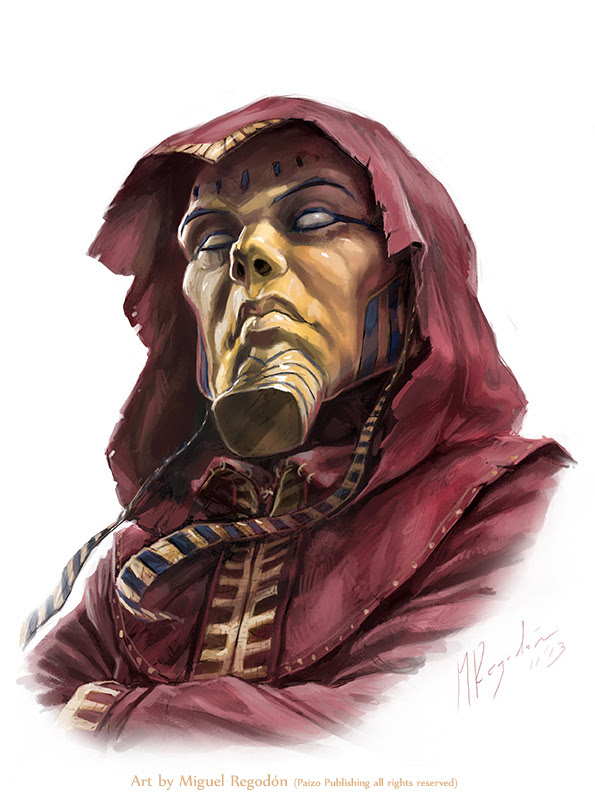 The city is composed of three districts, one for each of the dominant races of the Three Kingdoms:


The Valley of the Princes

The Valley is a dynasties-old burial ground for long dead, non-royal nobility. It is located across the river from Wati and Peraten, equidistant from the two sites. This necropolis was unearthed more recently than the Dead City. The majority of the tombs have been carved out of the rocky cliffs in a natural valley near the pyramid, while others exists outside the entrance of the valley. The only free-standing tomb is a pyramid outside the entrance to the valley. Parties thwarted by the pyramid have sought to plunder the smaller, outlying tombs--but many of their treasures have long decayed, consumed by the kas of those interred. Few, if any, have entered the valley proper.

The valley consists of three, connected corridors; each with distinct features:

Sepulcher of the Servant is located in the Eastern Corridor of the Valley of the Princes, beyond the tomb of Fen-Ra-Shep.

Wati is a walled-in, long-dead city that was recently uncovered by a sandstorm.  Petty nobles who make their home in Peraten, such as Lady Sebti and Lord Oshep, have warrants from the Pharaoh to commission further expeditions into the Necropolis.  The murder of two guards at the gates of this city has led to the current investigation into the Order of the Medjay and the Embalmers' Guild.

Esphe is a votary at the Great Temple of the Sun, and a frequent visitor of the quarry shrines.  She is one of Kiji's contacts.

Ibankhknum (or simply Iban; male ramfolk fighter) is a captain in the ranks of Phararoh's guard. He had asked the party to investigate a possible lead related to the murder of two Wati guards.

Order of the Medjay is a special branch of Pharaoh's royal guards responsible for imperial level investigations, intelligence gathering, and the safety of Pharaoh and his immediate family. The local leader of the order is Meret-Hetef, who would follow the party to the Sepulcher of the Servant.

Nebta-Khufre is a necromancer, and a member of the Embalmer's Guild (and possible associate of Nephethus).  A letter from Nebta-Khufre to Oshep confirmed that he was looking for a particular object in Wati.

Sebti is a vizier, and rival to Oshep.  The party investigated several sites in Wati on her behalf when they first came to Peraten.

While Jaeth, Pleebit, and Cecil searched Iban's home for any clues, Aloysa visited Sebti and Kiji reached out to his contacts it the quarry shrines.  Talking to Iban's pet jackal, Pleebit learned that "painted men" took the captain.  Aloysa learned that the Order of the Medjay does not serve Oshep alone, but all viziers--with the Grand Vizier (a position currently unfilled) having final authority.  Kiji learned that the Order operates out of private chambers in the Great Temple of the Sun.

The party called in their connections to get an escort through the Great Temple to one of the secret chambers used by the Order.  An unassuming gathering hall proved to have a sound-proofed secret door descending into an interrogation chamber--where Iban and two elves were found chained, being attended to by several members of the Order.  Cecil and Aloysa sneaked in first, and Jaeth led the charge to follow, rescuing Iban and the elves.

Iban, through his elven connections, had tracked down Nebta-Khufre:  the necromancer who had worked with Oshep in getting a team from the Embalmer's Guild in to Wati.  The Order wanted this information, but Iban was unwillng to share it with a possibly corrupt agency--so he and his contacts were taken.  Once freed, Ibam shared the location with our party:  the Sepulcher of the Servant in the Valley of the Princes.

En route to the Valley, the party noticed that they were being followed.  Following some aerial acrobatics by Jaeth and Kijinx (the fighter's figurine of wondrous power), the party and their pursuers met to share information.  According to the Order, Nebta took an artifact called the Mask of the Sphinx God--one part of the Thrice-Divided Soul--from the Sanctum of the Erudite Soul in Wati.   In time, the two groups came to an agreement:  the party gets the necromancer, the Order gets the Mask he'd taken from Wati.

While travelling to the Valley of the Princes, Jaeth pulled Aloya aside to confide in her his growing feelings for Iban.  Though Aloysa and Kiji have known the ramfolk for a while, Jaeth only met him for the first time after Kiji was arrested.  The news that Iban went missing sent Jaeth into a frenzy that he only began to understand once Iban was safe.

The wounded Iban had been left behind with Nyala to recover--but he insisted on joining the party as they made their move against the necromancer Nebta-Khufre.  After patching up with wounds with divine magic, Nyala and Iban raced into the desert to find the party working alongside the Order of the Medjay.  With no time to question their motives, the group made their way to the Sepulcher of the Servant in the Valley of the Princes.

The Sepulcher was a grandiose temple carved into the face of the local cliffs, filled with statuary dedicated to an elder form of Nephthys.  Cecil scouted ahead while Iban, Meret-Hetef, and the Medjay kept watch behind.  The party uncovered two halls of record:  one of birth records stretching back to the earliest dynasties and earlier; the other containing death records.  Both lists included several Osheps and Sebtis--often used family names in particular clans.  In at least one instance, an Oshep and a Sebti appeared as spouses.

In one record hall, the disembodied, undead head of Nebta's grandmother was found in a gilded cage. After sharing any information she was willing to with the party, she begged for her immortal existence to come to an end.  After the second hall was discovered, a narrow passage and staircase beyond revealed itself--almost as if concealed by magic.

Before descending to the second level of the Sepulcher, the party chose to camp in the temple's great hall for the night.  Come morning, they were woken by the sounds of shambling undead in the valley.  Indeed, a horde of zombies, skeletons, and mummies was descending upon the Sepulcher.  Meret-Hetef insisted that the party continue to the next level to stop the necromancer while she and her Medjay would fend off the undead.  Iban remained above as well to lend his ax to the fray.  Meret was insistent that the Mask was responsible for this, and that the necromancer be stopped as soon as possible.

After disabling a deadly tile trap by turning it into clay, the party encountered a ghoul that proved a worthy opponent.  In a dormitory, Cecil and Aloysa recovered a dozen books on the subject of the Sphinx Empire, including notes from the necromancer Nebta-Khufre in regards to the Mask of the Sphinx God.

In an inner sanctuary, the party encountered the necromancer himself, wearing the Mask from Waiti, and defended by two mummies.  The battle was fierce, but our heroes proved victorious in the end--with the horde of undead being disabled when the Mask was removed from Nebta. The party agreed to turn the necromancer over to Iban and the Pharaonic Guard; they remain uncertain, however, if they should honor their agreement to give the Mask to the Order of the Medjay.

Before returning to Iban and Meret-Hetef on the temple's first level, there remains a descending stairwell to explore.
Posted by ENC at 4:51 PM